#EndSARS: Cars Belonging to Opposition Coalition Spokesperson, Over 50 Others Razed 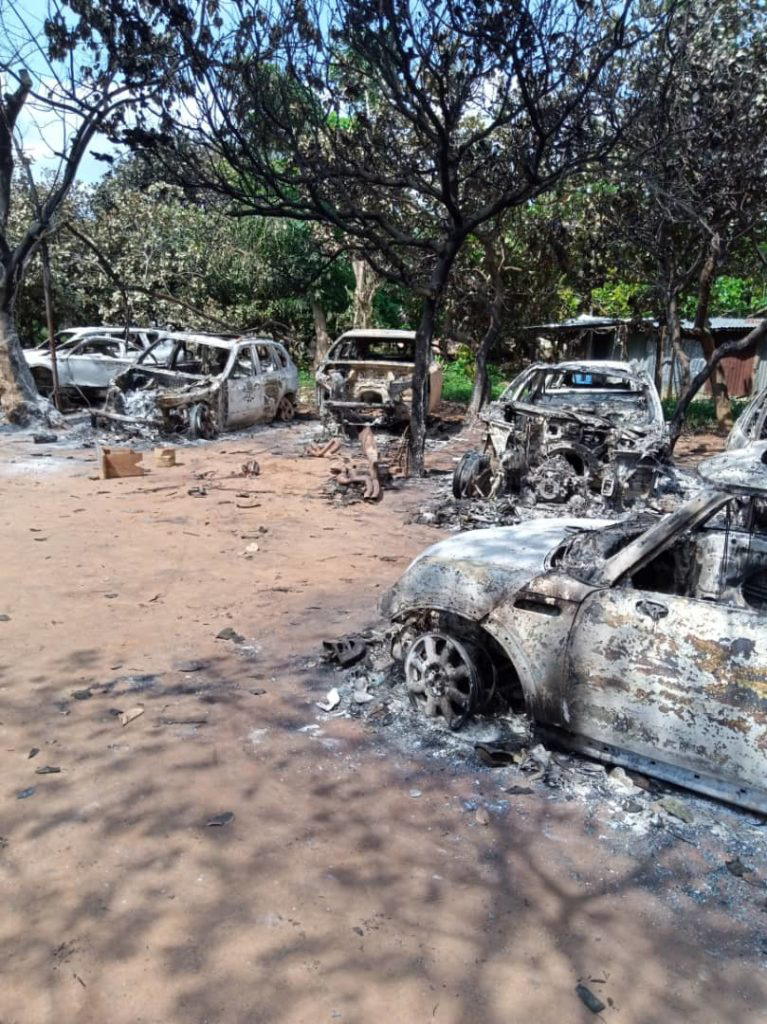 Businesses worth billions of Naira have been burnt to ashes in Apo, a suburb in the Federal Capital Territory while fatalitities were also recorded as a group of thugs alleged to be Pro Buhari militia invaded the APO mechanic village.
Reports say the alleged pro Buhari hired supporters and hoodlums in the late night of yesterday invaded APO mechanic village burning over 50 vehicles including the vehicle of the Opposition Coalition CUPP Spokesperson Ikenga Imo Ugochinyere, that of his Media aide Mr. Cosmos Ekpunobi, all in different auto repair shops in an attack eye witnesses say was targeted at Igbo businesses.
The Auto dealers alleged that Police men aided the hired hoodlums who were chanting ''Sai Baba, Sai Baba'' while carrying out their destruction of lives and properties.
Reports say It was a painful sight seeing peoples businesses being targeted based on ethnic profiling in the dead of the night.
This is coming after earlier clash between #EndSars protesters and pro-Buhari supporters 48hrs earlier which left vehicles burnt and some lives lost.
Yesterday's attack took many people by surprise.
The Opposition Spokesperson Ikenga who visited the scene of the attack wept at the carnage and blamed Buhari of being behind the ethnic and religious incitements that led to the APO carnage by his hired thugs.
The CUPP spokesman asked, “how did we get here? The government is not doing anything. The thugs who carried out the destruction are hired. These are sponsored militia working for people in government. How did ethnic angle come into this whole thing?
“If the government is angry with the protest, it should organize its own to test its popularity. When these people came, the police where there and didn’t do anything.
''What the protesters are asking for is good governance. What the presidency has succeeded in doing is widening the gap of ethnicity.”
He added that the thugs, who destroyed the auto mechanic shop, which specialized in Mercedes and BMW cars were imported.

Speaking with newsmen earlier, the owner of the mechanic shop, where several exotic Mercedes cars, including bulletproof ones were burnt beyond recognition, Uche Ndukwe said that what was destroyed in his shop was over N200 million.

Also speaking at the APO mechanic village, Barr John Anthony, accused the government of not doing enough, adding that security personnel were there when thugs were burning cars at the mechanic shops.

Chinedu Stanley on his part said, “we were trying to secure the cars and the security men were here, instead of chasing the hooligans, they were pursuing us instead.

''The thugs that carried out these wicked act, we learnt they are not from this community, that they were imported.”

Since the carnage, reports say the president and the FCT Minister have not visited the scene or is there any attention to the evils of Apo midnight raid.
Among the vehicles belonging to the CUPP Spokesperson that were destroyed include a Mercedes-Benz and  a BMW armoured 7 series.
News