Edo Decides: Harassment, Intimidation of Voters, Opposition Should Have No Place in Our Democracy - Ekweremadu 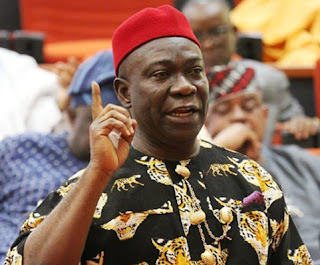 As the people of Edo State go to the polls in the 2020 governorship election, former Deputy President of the Senate and member of the Peoples Democratic Party, PDP, National Campaign Council for Edo State, Senator Ike Ekweremadu, has called on the security agencies and the Independent National Electoral Commission, INEC, to play by the rules in order to revive faith in the nation’s electoral process.

Uche Anichukwu, the media aide to Ekweremadu stated in a statement that he made the call in a short post on his social media handles Saturday morning.

The lawmaker, who is also on the PDP team in Edo State to monitor the election, insisted that voter and opposition intimidation should have no place in today’s election or at any other time in the nation’s democracy.

He said: “As Edo decides, history beckons on INEC to restore the sagging faith of Nigerians in the transparency, freeness, fairness, and peacefulness of our elections. The Edo 2020 election mustn't only be free and fair, but must also be seen by all to be so.

“By so doing, INEC will be justifying the enormous resources appropriated to it by the National Assembly and the far reaching electoral reforms, which I was privileged to be a part of, to secure financial and administrative autonomy for the Election Management Body and to free it from political control.

“Security agencies must eschew partisanship, knowing that it is both in their own and the nation's best and larger interest to preserve and grow our democracy. Therefore, the harassment and intimidation of voters and opposition should have no place in our democracy today or at any other time”.

Ekweremadu, who is also a Member of the Senate Committee on INEC, called on the people of Edo State to come out en masse to vote and also ensure that their voted count.

“Importantly, I call on Edo people to come out en masse to vote and ensure a violence-free environment. If you vote, you're entitled to your vote counting; if you don't, then your vote will certainly not count.

“Meanwhile, I'm also on ground here in Edo with other compatriots to monitor the election”, he concluded.