VIDEO: Thomas Sankara, An Upright Man In A Sinful World 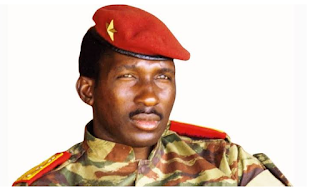 According to Answerwiki.net, Thomas Sankara is best referred to as “Africa’s Che Guevara”.
Sankara, of blessed memory, was a Burkinabe military captain, Marxist radical, pan-Africanist and President of Burkina Faso whose leadership began in 1983 and ended in 1987 when his government was toppled by Blaise Campaore (His second in command) in a coup d'etat.
He was an authentic and disciplined African leader whose attention had been his home country,  Burkina Faso.
He took over power in a bloodless coup on the 4th of August 1983 at the age of 33.
Features