NLC Calls On National Assembly To Strengthen Laws Against Rape 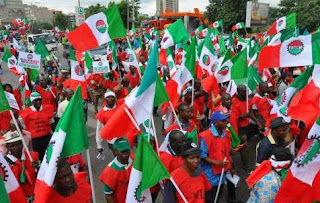 The Nigeria Labour Congress (NLC) and Organized Labour in Nigeria have strongly condemned what they described as the current epidemic of rape, sexual violence and other forms of violence especially against the female gender.

A statement personally signed by the NLC President, Ayuba Wabba in Abuja said Organised labour in Nigeria is alarmed that the country’s  age-long culture of respect for women is being torn into shreds by criminals who believe that the female body is theirs to seize, ravish and devour at will without consequences.

The  statement said; ''..recent rape and killing of Ms. Uwaila Omozuwa, a 22-year old 100 level student of University of Benin, Edo State on Wednesday 27th May 2020 is a cruel addition to the long list of Nigerian women and girls who have had their body privacy and their lives desecrated and destroyed by rapists.
"It is more horrifying that the perpetrators of this heinous crime no longer have respect for any physical, social and religious boundaries.  Ms. Uwaila Omozuwa was murdered in a church where she sought refuge in pursuit of learning. Many girls and women have been raped and sometimes killed in their parent’s houses, husbands’ homes, workplaces especially house helps, school hostels, in the open field, and in forlorn places. The message rapists are transmitting is that our girls and women are not safe anywhere. What an impetus! Such audacity!!
“On April 27, 2020, 18-year old girl Jennifer was gang raped by five men in Narayi, Kaduna State. As is norm in these parts, the family was threatened to keep hush over the case but for the intervention of human rights activists in Kaduna who blew the lid on the matter. Not long ago, an eleven-year old girl and a thirteen-year old girl were gang raped in Ilorin, Kwara State. As if the life of girls and women are the cheapest commodities in our part of the world, on 28th May 2020, a seventeen-year old girl, Tina Ezekwe was gruesomely felled by police bullets during a supposed enforcement of the lockdown curfew at Iyana Oworo part of Lagos metropolis, at a bus stop near her home.
“According to a national survey sponsored by the United Nations Women (UNWomen) in 2014, one in four women in Nigeria had experienced violence during childhood, with about seventy percent of the affected girls and women reporting that it happened more than once. Out of the number of affected women, only 5% sought help and only 3.5% received any help such as medical assistance and counselling.
“Rape is a terribly heinous crime. It is a crime against the body and the soul. It leaves an eternal scar on the spirit of its victims. It is pertinent to underscore the point that even men could be raped. Congress believes that it is high time the rape epidemic was uprooted in Nigeria.
“We also call on the National Assembly to expedite legislative action on some of the bills before it that are aimed at strengthening penalties for rape and increasing the protection of children, girls, women, the aged and other vulnerable persons. We also call on the National Assembly to quickly domesticate the International Labour “Organization’s newest Convention – Convention 190 on Violence and Harassment of Workers.
“Furthermore, we call on the police to improve the capacity of its officers to deal with cases of rape. The delay, compromise of evidence and unwillingness to prosecute rape offenders to the fullest extent of the law suggest a society that tolerates abuse and violence against women.
“Rape thrives under the shadows of silence. We must disavow the culture of silence on rape cases. We will be judged by how we treat the weak and voiceless. We call on law enforcement agencies and social institutions to rise up to this challenge. It is our collective duty to protect our mothers, daughters, sisters and brothers from the deadly fangs of rapists. If we fail in this onerous duty, then we would have truly failed.” It concluded