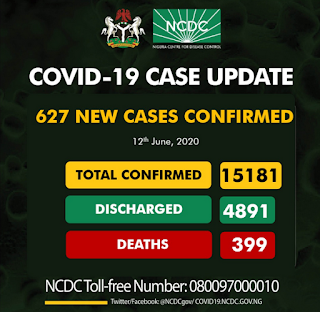 The NCDC said that till date, 15181 cases had been confirmed, 9891  active cases 4891 cases have been treated and discharged deaths , 88, 432 samples have been collected, and 399 deaths have been recorded in 35 states and the Federal Capital Territory.

The health agency said that in spite of the difficulties faced as it responds to the COVID-19 pandemic outbreak in the country, it will remain focused and committed to its  mandate of protecting the health of all Nigerians.
The NCDC called on Nigerians as they celebrate Democracy Day to reflect on their  journey as a nation and Take Responsibility for the future they all seek.