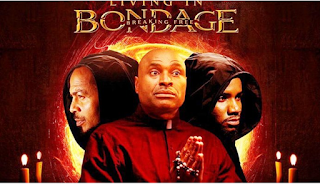 Airtel Nigeria, in partnership with Trace Content Distribution, has announced the availability of the classic drama thriller, ‘Living in Bondage – Breaking Free’, on the Airtel TV platform.
Airtel made the disclosure in a statement on Saturday in Lagos.
It said the movie was directed by veteran actor, Ramsey Nouah and that the drama thriller was a sequel to the 1990’s blockbuster ‘Living in Bondage’ with a riveting plot and an ensemble cast, including Kanayo O. Kanayo, Kenneth Okonkwo and Enyinna Nwigwe among others.
According to the statement, ‘Living in Bondage – Breaking Free’ which executive producer was Charles Okpaleke, has received critical acclaim taking home 11 awards (a landslide) at the 2020 Africa Magic Viewers’ Choice Awards (AMVCA).
It said the movie got numerous positive reviews from critics, reviewers and movie lovers, with many praising the cinematography, setting and performances from the cast, especially Ramsey Nouah, Muna and Kanayo.
Airtel said the movie had gone to break box office records, ranking 11th overall on the list of highest-grossing Nigerian films of all time.
Commenting on the inclusion of the movie on Airtel TV, Dinesh Balsingh, Chief Commercial Officer, Airtel Nigeria, said the telcoms company would always go the extra mile to deliver top-notch and quality content for telecommunications consumers on the TV platform.

“Airtel is revolutionizing the television viewing experience for all its customers.

“With Airtel TV, we bring the best shows, movies and live television to our customers, engaging them with premium content as well as bringing happiness and laughter to everyone regardless of location, entry fee and income level,’’ Balsingh said.

Also, Managing Director of Trace, Sam Onyemelukwe said: “Airtel TV represents a revolution for movies and series in Nigeria and beyond, Trace Content Distribution (TCD, a new division within Trace) saw the platform as a massive opportunity for the industry.

He said that as a key aggregator for Airtel TV, they were excited to bring Living in Bondage onto the platform and look forward to continuing the trend with other blockbuster Nollywood movies.

Onyemelukwe said that customers of the telco had thousands of other Nollywood and Hollywood blockbusters to choose from on the Airtel TV app at no subscription cost.

According to the statement, customers could also enjoy data-free access to movies on the app for the first seven days after download.

It said that to enjoy Airtel TV, customers could download the app on Google play store and Apple store then, launch and click “register”.
NAN