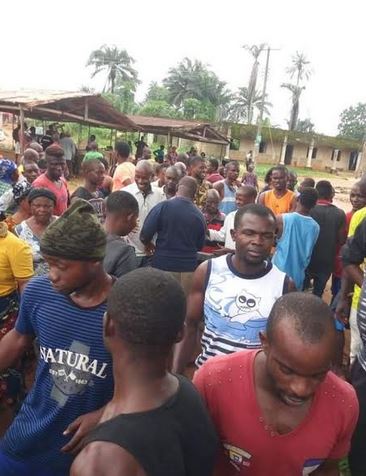 Youths of Avodim autonomous community, Umuahia South Local government area of Abia state have protested what they described as the illegal acquisition of their land by the Federal ministry of lands for the development of Housing projects.

The protesting youths who staged a peaceful demonstration, accused the traditional ruler HRH Eze Boniface Onyemachi and members of his council of conniving with the government to sell off community land without any form of compensation.

The peaceful protesters were however confronted by security operatives deployed by the traditional ruler to ensure that law and order is guaranteed, but the protesting youth insisted that the move was unnecessary and a ploy by the traditional institution in the community to stifle their genuine agitation for the recovery of their ancestral land.

In an exclusive interview with this blog, Youth leader of Avodim autonomous community, Erugo Wisdom, said the youth were frustrated at the likelihood of losing all their inheritance and that of their future generation if the continued sale of the lands known as Amauba farm settlement is allowed to continue.

He said: "on Tuesday, 24th June, the entire community went on a peaceful protest as a result of the intention of the Federal ministry of lands to take our remaining portion of land that is reserved by our fore fathers, though the Abia state government has already taken phases 1 and 2 of the said portion of land for Housing estate, the federal ministry of lands is still insisting on taking the little portion that is left, thereby leaving us with nothing for future expansion.

"The present place we are dwelling now is densely populated with valleys surrounding us.  So the purpose of our protest is to plead with the government to leave our little portion of land alone and probably go to other communities around Umuahia where they have not taken land before, because we have no other place to move and even the lands  that were taken by the Abia state government, they have not paid us any compensation for over six years, we are pleading to relevant agencies of government to come to our aid by solving this problem for us." he said.

Secretary-General of Avodim Youth Association, Comrade Frank Nweke insists that the people of the community are not interested in giving out the phase 3 of the lands in dispute;
"... in fact the community believe that they have not given the phase 2 to anybody, besides Avodim has no communal land, every land belongs to individual families which is their only source of livelihood and it is unfair for the state government to acquire land from the community on a 50-50 sharing arrangement" he said.

"Since 2012, it is humiliation, intimidation and insult to the land owners in fact they should take a look at the 1978 land use decree which recognizes customary land tenure system and Avodim community particularly practices this customary system which must be respected.

"If our forefathers made a mistake to issue a proposal to the state government, that doesn’t mean that they have acquired the land, it is only a proposal which they have not paid ten kobo to anybody and which we are not prepared to collect anything from anybody, they should remember that we don’t have a memorandum of understanding as regard that particular place therefore we are not giving the land out to them." he concluded.

On his part, the Secretary, Ubakala Youth Association, Abuja Chapter, an indigene of Avodim autonomous community, Enyinnaya Osisiogu said the sale of the lands have in no way benefited the people of the community who expected that it would be used to build tertiary institutions and industries which would ensure the employment of the youth of the community.

"The village is all sold out,  land here is now very expensive, he said.

He also appealed to the traditional ruler and members of his council to retrace their steps as far as their involvement in the matter is concerned: "the traditional council must also desist from using security agencies to intimidate the law abiding and peaceful youth who were only expressing their fundamental rights of peaceful protest" he added

Osisiogu while appealing to the Abia state government and other stakeholders to intervene in the lingering crisis, said dialogue is a veritable means of resolving the issue at stake, appealing to government not to ignore the cries of the people.