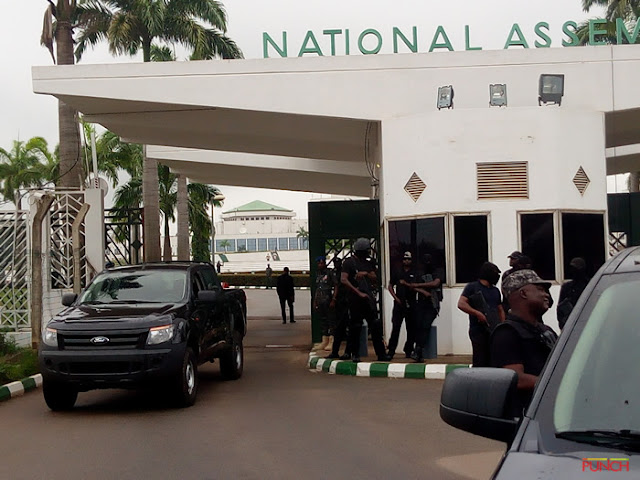 The security lapses in and around the National Assembly Complex seems to have worsened, with three members’ offices looted by thieves within the week.
On Wednesday, office of the lawmaker representing Lagos West Senatorial District and wife of the national leader of the ruling All Progressives Congress, Senator Oluremi Tinubu, was looted, with computers and other devices stolen.
Also on Wednesday, the office of a member of the House of Representatives, Mr. Muhammed Gausu Boyi, representing Ringim/Taura Federal Constituency, Jigawa State, was burgled, with valuable items carted away.
Mrs. Tinubu, in a statement issued on Thursday night by legislative aide, Nifemi Aje, disclosed that an HP laptop computer, Smile internet modem, some copies of the Nigerian Constitution, machine box attached to the Closed Circuit Television camera, among others, were stolen by the yet-to-be identified thieves.
Tinubu disclosed that report of the theft has been lodged at the National Assembly’s Police Post.
Boyi, in a petition to the Sergeant at Arms, Brig.-Gen Mohammed Sani (retd.), reported that his office had been emptied by the thieves.
According to the letter dated 10th January, 2019, listing items missing from his office, Boyi said two Samsung Plasma Television sets, two HP photocopying machines, one water dispenser, one Samsung refrigerator and a printer were stolen.
The lawmaker, in the letter he signed, said his office assistance, Mr. Abba Yusuf, discovered the burglary in the early hours of Thursday when he resumed for work.
He noted in the letter that a similar report had been made at the office of the Divisional Police Officer of the National Assembly Division of the Nigeria Police.
Another member of the House, Mr. Muazu Lawal, from Zamfara State, also reported to both the Sergeant-at-Arms and the DPO’s office that his office was burgled in December 2018.
The DPO, Mr. Umar Sambo, a Superintendent of Police, confirmed that the incidents had been reported to the division, saying that investigations of the crimes were already ongoing.
The offices were locked when Punch newspaper correspondent visited them.
When contacted, Sergeant at Arms Sani declined to comment on the thefts.
:
News