Police About To Break Into My House - Dino Melaye 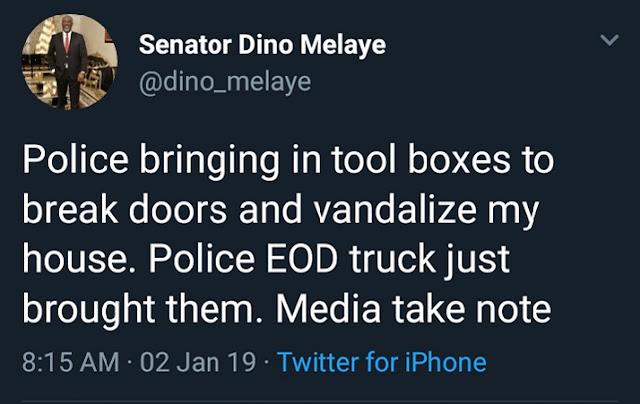 Senator Representing Kogi West in the National Assembly, Dino Melaye has cried out over what he described as a plot by the police to break into his house in an attempt to arrest him.

The Nigeria Police Force had asked the lawmaker to surrender himself for arrest and investigation for attempted culpable homicide.
It stated that the police operatives deployed in his house with an arrest warrant would not leave his Abuja residence until they apprehended him.
The Force spokesman, Jimoh Moshood, said in a statement on Monday that Melaye had repeatedly spurned several invitations asking him to report for investigation into the alleged shooting of one Sgt. Danjuma Saliu, attached to 37 Police Mobile Force while on stop and search duty along Aiyetoro Gbede, Mopa Road in Kogi State.
He explained that Melaye and his armed thugs shot and injured Saliu who is currently on admission at the Federal Medical Centre, Lokoja.
Police investigators, he said, had invited Melaye through a letter of invitation dated July 23, 2018, signed by the Commissioner of Police, Kogi State Police Command, and addressed to the Clerk, National Assembly, Abuja.
News