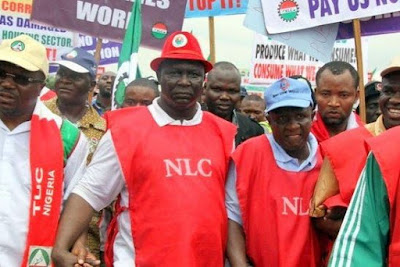 The Nigeria labour Congress NLC has debunked reports in the media that it is going ahead with a general strike on the 8th of January 2019 following the delay in transmitting the recommendations of the Tripartite Committee on a new National Minimum Wage to the National Assembly by President Mohammadu Buhari.

A statement signed by the General Secretary of NLC Peter Ozo-Eson said it was unfortunate that some media houses misrepresented its call for protests and mass mobilisation against the delay to mean general strike.

In the statement captioned; 'Tomorrow is a day of protest and mass mobilisation" NLC said it will inform the public when a date for a strike action is decided.

Below is the full text of the statement:

Tomorrow is A Day of Protest and Mass Mobilisation


It has come to our attention that some section of the news media has largely misrepresented our action plan in reaction to the delay in transmitting the recommendations of the Tripartite Committee on a new National Minimum Wage to the National Assembly by President Mohammadu Buhari.


It should be recalled that the National Executive Council of NLC met on 17th of December last year and directed that we hold nationwide mobilisation of workers and our allies if by 31st December 2018 the bill on the National Minimum Wage has yet to be sent to the National Assembly to be passed as an Act of Parliament. We immediately announced then that on Tuesday, 8th January 2019, there will be a nationwide mass mobilisation and protests simultaneously across all states in Nigeria. This does not translate to a strike.


It is on record that each time we had cause to embark on a national strike, we say so publicly without any equivocation. We still don’t understand where the story about a strike commencing tomorrow came from.


Already, all our State Councils, affiliate unions and allies in other pro people mass organisations now popularly referred to as Civil Society Organisations have been fully informed and mobilised to ensure the success of tomorrow’s mass protests in all the states and the Federal Capital Territory.


When a date is decided for the commencement of a strike subsequently, we will inform the public appropriately.