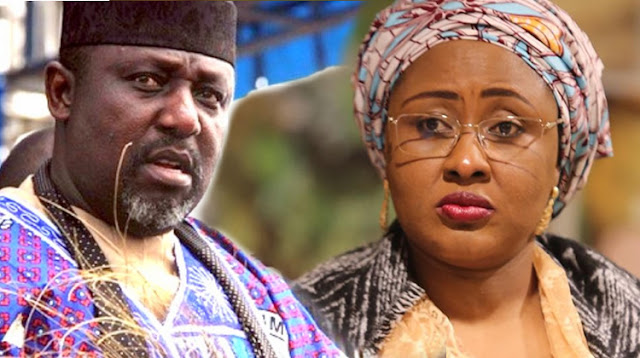 There was pandemonium on Saturday at Dan Anyiam Stadium, Owerri, Imo State, when supporters of the state All Progressives Congress’ governorship candidate, Senator Hope Uzodinma, clashed with those of the Action Alliance governorship candidate, Uche Nwosu.
The political tension in the state was further heightened, by the disagreement between the wife of the President, Aisha Buhari and Governor Rochas Okorocha, after the governor boasted that his son - in- law, Nwosu, would win the state governorship election and not Uzodinma.
Dolapo Osinbajo, who represented Aisha at the event, however, told the crowd to vote for Buhari and the APC candidates in the forthcoming elections.
The governor ’s comment angered the APC leaders and women who came from the five states of the South-East, forcing them to leave the stadium.
He spoke at the South-East women and youths rally held in Owerri.
The crowd keenly watched the battle of supremacy between the governor’s men and supporters of Uzodinma at the stadium.
The master of ceremonies refused to acknowledge the presence of Uzodinma and Senator Ben Uwajumogu.
But pressure from party leaders who came from Abuja and the APC supporters in the state forced the MC to recognise them.
Earlier, agents of the state government were reportedly seen destroying posters belonging to Uzodinma. But the senator ’s supporters came out to stop the action and insisted that the posters must be displayed.
The supporters overwhelmed the governor ’s men pasting Nwosu’s posters inside the stadium.
There were gunshots from security operatives when Okorocha’s wife was addressing the crowd.
Two women sustained gunshot injuries and were rushed to the hospital. Security agents later restored normalcy.
The National Woman Leader of the APC, Salamatu Eluma, urged the people to vote President Muhammadu Buhari, Uzodinma and all the APC candidates in the South- East.
Commenting on the situation, Okorocha said, “The APC has not been fair to us. We are only being calm because of President Muhammadu Buhari who has already won in Imo State. We are going to support Buhari but let me tell you people, after we were cheated by the APC, in order to deliver the President, we formed an alliance with other political parties and leading among them is the AA led by Uche Nwosu.
“Do not be deceived, Uche Nwosu of the AA will win the governorship election in Imo State because he is on the ground. We have no other candidate; we will not support those with stolen mandate.”
Reacting, Uzodinma said the rally was designed to undermine him.
He spoke through the state APC Publicity Secretary/campaign spokesperson, Mr. Enyinnaya Onuegbu.
Onuegbu said, “Okorocha is just fighting like a drowning man. He will finally get drowned on March 2, 2019. Buhari and Uzodinma will coast to victory alongside other APC candidates in the state.”