After Plagiarism Allegations, APC Claims its Website was Hacked 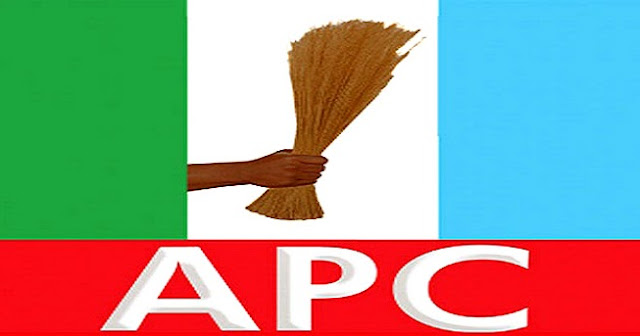 The All Progressives Congress has raised the alarm that its official website has been hacked.
The APC National Publicity Secretary, Mallam Lanre Issa - Onilu, raised the alarm in a press release on Saturday.
The release read, “Our attention has just been drawn to the fact that the APC’s official website, apc.com.ng has been hacked with unauthorised content posted on our pages.
“I have instructed that the site be taken down. Steps are underway to clean it up, strengthen the security, and restore it as soon as possible.
“We won’t allow the desperate people to succeed in their evil plots.”
The Guardian newspaper had reported that the party's website published a plagiarised manifesto.
According to the Guardian, the first paragraph of the power supply section of the party’s Next Level agenda published on apc.com.ng showed remarkable similarities to the content published on several other websites.
In fact, the section begins with the statement, “Our first priority is keeping America safe and secure,” which indicates that it was copied and not edited before it was published. 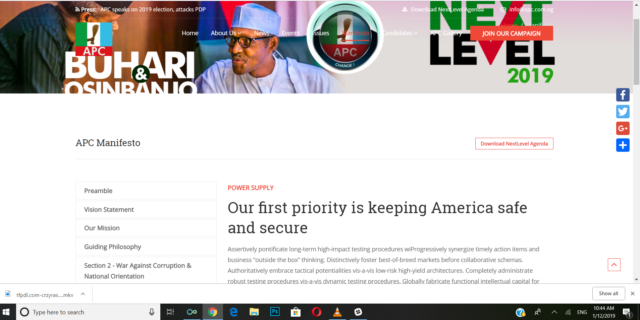 The official registrant of the website is listed as All Progressives Congress, its admin named as Shola Erogbogboand contact email address is listed as info@apc.com.ng.

Whois.net lists the billing address of the website as 16, Bissau Street, Zone 5, Abuja, billing name as All Progressives Congress and the sponsoring registrar as Web4Africa, a South African information technology company.

Although the website listed in the Twitter bio of the official Twitter handle of the party is officialapcng.com, it is, however, not working when The Guardian checked on Saturday morning. When visited, the site redirected to a download option for an unnamed folder.

A media website developer told The Guardian that that particular website may have been hacked or the server has a malware.

“It is very possible that site has been hacked or that server has a malware attack,” Elijah Bello said.

“It is also possible that the site of creating a new site has been giving to someone who does not know his job.”

This is not the first time the president will be accused of plagiarism.

In September 2016, a part of President Muhammadu Buhari’s Change Begins With Me” speech, delivered at the launching of a social initiative against corruption and other vices, was copied from former American president Barack Obama’s 2008 victory speech.

“It was observed that the similarities between a paragraph in President Obama’s 2008 victory speech…are too close to be passed as coincidence,” presidential spokesman Garba Shehu said in a statement, adding that an unnamed “overzealous” speechwriter responsible for the plagiarism will face “appropriate sanction”.

The “Change Begins With Me” campaign itself was allegedly appropriated by the minister of information Lai Mohammed.
News