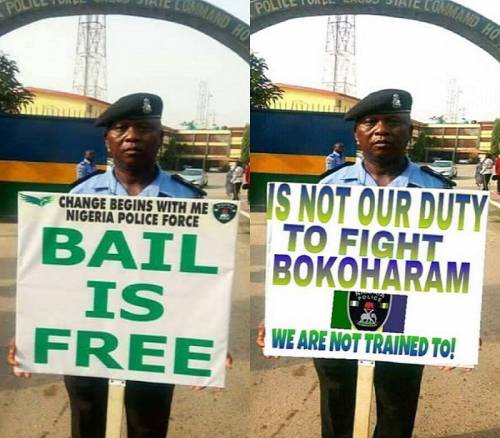 Imohimi Edgal, the Lagos State Commissioner of Police, says it will take legal action against those behind a photoshopped image of a policeman.

Edgal has also called on the general public to disregard the picture of a policeman bearing a banner on which was inscribed: 'IS NOT OUR DUTY TO FIGHT BOKO HARAM. WE ARE NOT TRAINED TO'.

In a statement by Chike Oti, the Lagos State Police Command Public Relations Officer (PRO), the command said it is the handiwork of mischief makers to discredit the Force.

He said the picture is that of CSP Yusuf Ajape, who was photographed during the change-begins-with-me campaign.

In the original picture, the said officer had a placard with an inscription that read: 'Bail is Free'.

The Command said it “finds it bewildering".

The statement continued: "What gain is there for those behind the removal of the original message which was 'BAIL IS FREE', and replacing it with a message that is clearly aimed at demoralising our gallant policemen combating the insurgents in the North-Eastern part of the country?

“Based on the development, the CP has activated the ICT department of the Command to, in collaboration with relevant bodies, fish out the people behind the misinformation for appropriate legal action.”
News