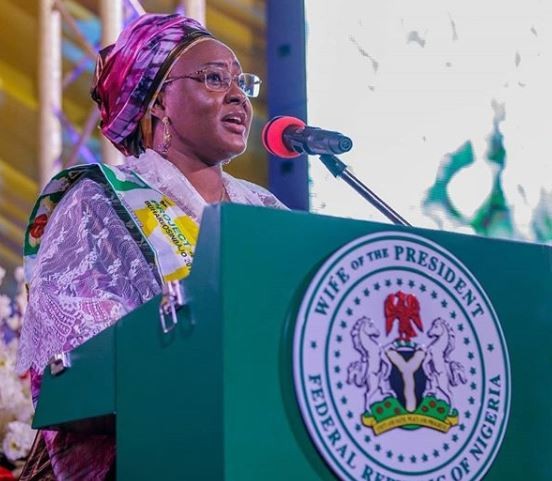 On Tuesday, wife of the President, Aisha Buhari lamented that two powerful personalities have constituted themselves as a cog in the wheel of speedy development of the country.
Aisha Buhari, who spoke at a conference organized by Project 4+4 in Abuja, however, did not mention the names of the powerful persons.
The First Lady explained that the government had achieved a lot but could have achieved more or even achieved all it had planned for in one year but for two people in government who will never allow things to move fast.
She said that she was disappointed in men who rather than fight these two men, go to them in the night begging for favours.
”I have realized that Senator Babafemi Ojodu, Special Adviser, political, to the President, and Dr. Hajo Sani, and wife of the Vice-President, Mrs Osinbajo, are not comfortable with my saying this and want me to confine myself to my prepared speech but we must say the truth” she said.
The President’s wife insisted that the powerful duo were retrogressive elements preventing the government from moving forward.