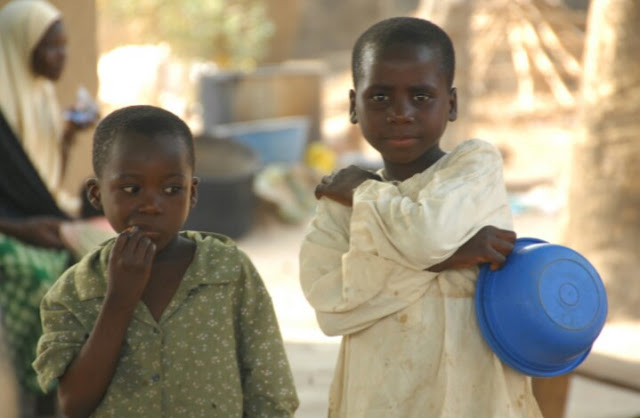 Almajiri is a system of Islamic education practiced in Northern Nigeria, where young children are taken away from their parents and enrolled in Islamic schools to learn Islamic tenets and doctrines.

These schools are often very far away from the homes of these children and they sometimes face harsh conditions while growing in the system.

United Nations Children's Fund UNICEF data indicates that about 47 per cent of child-labourers aged 5-14 years in Nigeria are out of school, even as  millions of children attempt to combine learning and earning.

Due to the cultural and religious backgrounds of parents of kids involved, reports in some quarters say the Almajiri system overtime has proven to be a  force in opposition to Western education, especially in Northern Nigeria.

Mallam Jimoh Salman, The executive Director grassroots development and Advocacy Center, Ilorin, Attributes poverty and sociocultural status of family, poor state of primary education system, as the fueling factor responsible for the high rate of out of school children in  northern Nigeria,

He posited that to understand the concept of  Almajiri system, it is important to consider it's origin, the  roles and functions it is expected to perform,  while noting that the system has not only been misinterpreted, but also undermined in a way that makes the Almajiri child feel betrayed by family, socety as well as the government.

According to Salman: "financial inability of parents and society at large to sustain education and livelihood of their wards has been a strong contention against early child education in northern Nigeria".

While calling on government to revitalize the primary education sector so as to allow inclusive participation of every child irrespective of the financial status of their parents, Salman however Suggested that Almijiri schooling system should comprehensively be exposed to other forms of education that will enable the kids acquire other skills that will help them live a sustainable life.

With no exact figure of the number of Almajiri children in northern Nigeria, it is largely believed that there are over nine million Almajiris wandering the streets in terrible condition of living as they beg for food to eat.

Another respondent, a Religious cleric, Mallam Tajudeen Arowosaiye in an interview with Eko Fm, admonished that to ensure equitable progress while trying to resuscitate the system, government should engage heads of almajiri institutions, traditional leaders, village heads, and emirate councils.

In his view, this would help to know the actual statistics of Almajiri children living in various northern communities.

The UNICEF inline with UBE program has continued to show commitment towards achieving equal access to education for all children, one of such gesture includes it's School enrolment campaign which seeks to partner stakeholders in the education sector at the state level, and also encourage states to prioritise education

The campaign seeks to underscore federal government's commitment to free and compulsory education and to encourage states to prioritise education.

This piece is written by Adeniyi Olamide Nicholas.