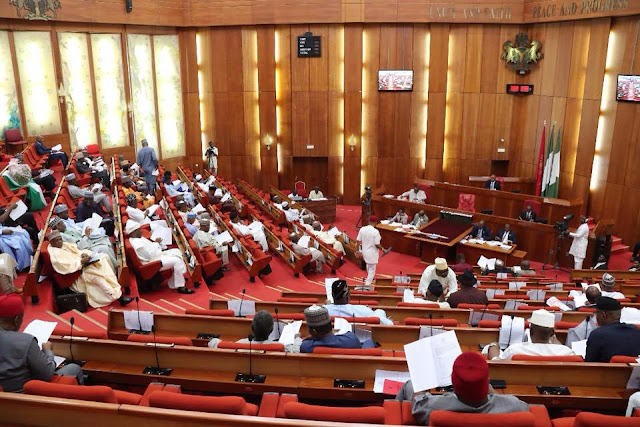 The Senate also urged the security agencies to search and rescue the personal staff of the slain Air Force Chief held hostage by the assailants.

Garba recalled that “Badeh retired in July 2015 in line with military tradition a pulling-out parade was held at the Mogadishu cantonment Abuja where Air Chief Marshal Badeh gave his valedictory speech before proceeding to his home state”.

She however regretted that the late Chief of Defence staff died from gunshot wounds sustained when his vehicle was attacked while returning from his farm alongside his driver while one of his personal staff is still held hostage by the assailants.

In his contribution, Senator Shehu Sani, who lamented that the killing was an addition to the cases of unresolved assassination, warned that the state must take the issue very seriously.

He said: “Badeh served his country from the beginning to the end, meritoriously. It is sad that he is a victim of assassination. He was killed few kilometers from the state capital. The state has failed Badeh. We should take the issue of security serious. He is a victim of an assasination.

“This should bring to light a national discourse. If this can happen to Alex Badeh, it can happen to anybody. It is an addition to the cases of unresolved assassination. The state must take this issue very seriously. We owed him a duty to ensure that such a thing never happen again. The security agencies should deploy necessary security technologies to fish out the killers.”

The Deputy President of the Senate, Ike Ekweremadu, in his contribution, lamented that the killer, like the case of Bola Ige and others, might never be found.

He said: “The killers might never be found because this is not the first time we would have such incidence. The time has come for us to ensure that assassins are found.

“Abuja, the FCT is becoming unsafe for the residents. We must ensure that all the CCTV are working in memory of Badeh and ensure that the killers are found.”

Ruling on the debate, the President of the Senate, Bukola Saraki said, “we need to do more in the area of security. Necessary measures must be taken to ensure that lives and properties are protected.