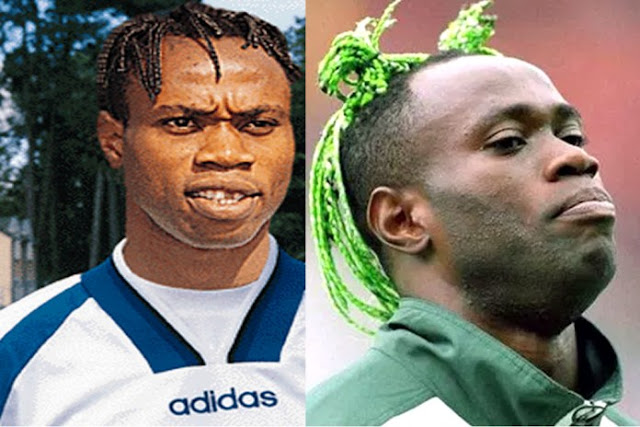 Former Super Eagles defender Taribo West has warned young footballers against signing slave contracts, which he revealed he was a victim of, during his early European career.
Taribo joined French Ligue 1 side Auxerre from domestic league side Julius Berger in a highly celebrated move in 1993.
But 25 years later, the Atlanta 1996 Olympic Games gold medallist revealed that he had a hellish time at Auxerre having signed a contract without knowing the details. This he added, also affected him, when he made another high -profile move from the French side to Italian giants Inter Milan in 1997.
“I played in Auxerre for (almost) free. I was playing under a contract for five years without knowing the contents and conditions binding the contract,” Taribo stated during Footballers Connect, an event aimed at bridging the gap between young footballers, professionals and ex- internationals.
“After the third year, Arsenal, Juventus, Glasgow Rangers, Sevilla and Betis came for me. I went to the coach stating that I wanted to leave but he sat me down, showed me my contract terms with Auxerre. I saw the details of what I had signed. Where my fellow defenders were earning as high as 120, 000 French Francs, I was going home with 3000 French Francs.
“I wanted to set Auxerre on fire that day. Immediately, I called my manager, who was turning me left and right (while) enjoying himself in Senegal.
“One day I went to see my coach after training where I met a certain manager who told me that about five clubs were interested in signing me. On the table I saw Arsenal, Juventus, Glasgow Rangers, Sevilla and Inter Milan. He began to make calls and Inter was the destination, I signed the contract papers without knowing its content yet again.”
In an interview with Punch newspaper, Taribo stated that he had used his experiences to guide young African footballers, who would jump at the bait of European football without considering the negative consequences.
“Most young Africans sign contracts they don’ t know about because they are desperate to play in Europe. I didn ’t know too. They need to have lawyers; that’s why the big players use their fathers or brothers as their agents these days. I didn ’t know all these during my time.
The first and second managers I had in Europe were the same. It was when I left my second manager that things got better for me. I don’t want our present generation of young players to fall victim too, ” Taribo added.
“Many Nigerian players of my era passed through the same torture but they hide it from the public, they don’t want to talk so that the young players can learn from them.”
News