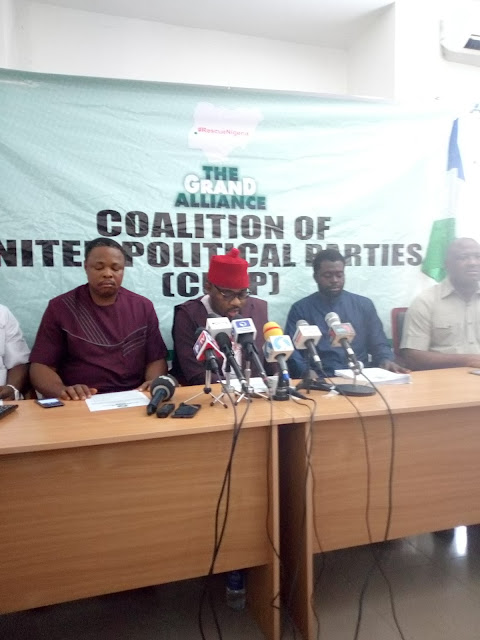 Over 40 opposition parties under the umbrella of Coalition of United Political Parties (CUPP) have said that President Muhammadu Buhari plans to use Article 2, of the ECOWAS Protocol on democracy and good governance as an excuse not to sign the Electoral Act Amendment.

The amendment if signed into law would make the use of card reader statutory and the only instrument of accreditation thereby permanently doing away with the use of incident form.

Addressing a press conference on Wednesday in Abuja, the Spokesman of the Coalition, Ikenga Ugochinyere flanked by leaders of other opposition parties expressed fear that if the amendment was not signed, the elections would end up the most violent in the nation’s recent history.

“We have been informed that after several undue delays, the President is set to communicate the National Assembly anytime from today that he would not be able to sign the amendment due to the existence of Article 2, of the ECOWAS Protocol on democracy and good governance which prohibits countries from making Electoral Act Amendments less than six months to elections unless there is consent of the political parties.

“How convenient for President Buhari who has severally disregarded and disobeyed the ECOWAS Court to suddenly begin to obey ECOWAS Protocol and not sign an amendment first sent to him in February, 2018?

“A president who has severally mouthed what he supposedly suffered from rigged elections and how an improved electoral process benefited him in 2015, is now the greatest antagonist to free and fair election,” he said.

Ugochinyere said that the coalition would adopt Opposition Code 20, if President Muhammadu Buhari failed to sign the Electoral Act Amendment Bill into law.

The Code is enshrined in Section 20, of the Administration of Criminal Justice Act which allows citizens to perform policing duties of arrest, according to the coalition.

“We shall be mobilising our people in all the villages and wards to stop any person seen sharing money in the polling units and retrieve such money. All the thugs and militia clothed to deceive and intimidate the people will be grabbed and handed over to the Police.

“The opposition cannot allow them to thwart the will of the people. It shall be a show of gallantry, patriotism, heroism and nationalism by our brothers and sisters who will stand in defence of the true values of our people as reflected in the ballot,” the parties said.

They also passed a vote of no confidence on the Inspector General of Police, Ibrahim Idris and asked President Muhammadu Buhari to allow him go when his tenure expired in January.