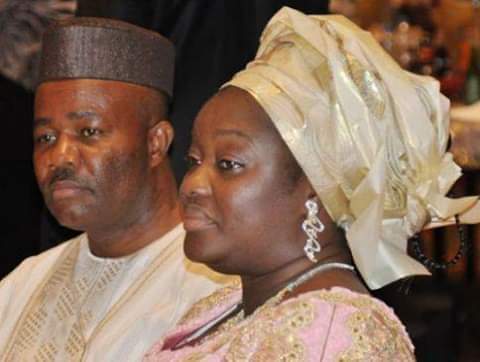 Senator Godswill Akpabio yesterday took the Archbishop of the Methodist Church, Ikot Ekpene, His Grace, Most Rev. Sunday Uko, to the cleaners for stopping his wife, Unoma, from making political comments during church service. Unoma Akpabio spoke at the Methodist Church, Ukana in Essien Udim Local Government Area during a service marking the presentation of the immediate past Secretary to the Akwa Ibom State Government, Sir Etekamba Umoren, as lay president of the church. She asked the congregation to vote for all candidates of the All Progressives Congress (APC), specifically President Muhammadu Buhari and the APC governorship candidate in the state, Obong (Dr.) Nsima Ekere in 2019. But the Archbishop of Ikot Ekpene, His Grace, Most Rev. Sunday Uko, who presided over the church service, got up from where he was sitting and approached Senator Akpabio to express his displeasure over his wife’s political comments.
The clergy scolded Akpabio’s wife for using the church service to do political campaign and made attempts to seize the microphone from her. A visibly angry Akpabio, who got hold of the microphone after his wife apologised to the clergy for her action, scolded the Archbishop for embarrassing his wife. He said it was wrong for the Archbishop to stop the wife from talking politics in church, saying that the reason why the clergy embarrassed his wife was because he was supporting Governor Udom Emmanuel. “You can’t embarrass my wife for talking politics in church because of your support for Governor Udom Emmanuel. I brought Udom and made him governor so nobody can claim to love the son more than the father.