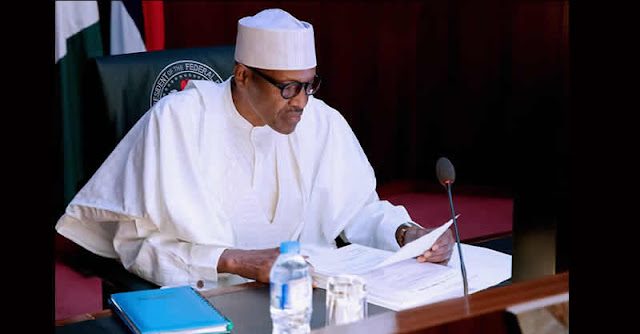 President Muhammadu Buhari has finally broken his silence on the bribery allegations against Kano State governor, Abdullahi Ganduje.
President Buhari, who spoke on the matter for the first time during an interactive session with Nigerians in France, said videos depicting the bribery had been given to security men for vetting.
In the videos widely circulated on social media, the governor was seen allegedly receiving kickbacks from contractors to the tune of $5 million.
During the interactive session, a Kano State student on scholarship in France, had showered praises on the governor, asking the President to emulate him.
But President Buhari was said to have snapped, asking the student if he had seen the videos of Governor Ganduje allegedly receiving bribe in dollars.
“Haven’t you watched the videos of the governor stuffing dollars under his gown?” one of the participants reportedly quoted the President as asking, while demonstrating how the governor was stuffing the bundles of dollars inside his pocket.
“We gave the videos to security agencies for vetting. And we will surely take action on the matter if he is found guilty,’’ President Buhari was quoted to have said.
But the president’s response was said not to have gone well with a lawmaker and a presidential aide who reportedly pleaded with journalists to remove the portion from their reports.
An online publication, Daily Nigerian, published by Mr. Jafaar Jaafar, had uploaded the videos which showed the governor allegedly receiving $5 million bribe, dressed in white Kaftan.
The publisher explained that the aggrieved contractors, who allegedly paid between 15% and 25% of the worth of contracts to the governor, accepted to do the video recording whenever they went to pay the alleged kickback to the governor.
Jaafar was challenged to produce the videos by various interested sections of the society, and this prompted him to release the first video on October 14, 2018.
The video was challenged by some groups, some of whom even tried to link it to the former governor of the state, Rabiu Kwankwaso, because Jaafar had worked with the governor as a media assistant.
But the allegation was debunked by Kwankwaso’s spokesperson, Hajiya Binta Spikin.
Although the governor dismissed the allegation and threatened to sue the publisher for defamation, Jaafar to further establish the authenticity of his claim as a whistle blower, released another video clip allegedly showing the governor, this time without a cap on his head, dressed in Kaftan, collecting and stashing wraps of dollars in his pocket on October 15.
The publisher then announced that his life was being threatened and went into hiding with his family.
He also insisted that he had 15 video clips of the alleged bribe episode with nine showing the face of the governor, while six only showed parts of his body.
Consequently, Kano State House of Assembly set up an adhoc panel to probe the allegation against the governor, while the state government suspended its plan of going to court to allow for the investigation of the lawmakers.
The publisher, Jaafar Jaafar, appeared before the committee on October 25 and was grilled on the authenticity of the clips.
He told the committee that he would not reveal the source of the clips, adding that he was ready to swear by the Holy Quran that it was the governor in the clips collecting kickback from contractors.
Although the governor was invited by the adhoc panel to state his own side of the story, he did not show up but sent his Information Commissioner, Malam Muhammad Garba to represent him.
The commissioner simply told the panel that his principal denied receiving bribe, adding that the governor had never collected a bribe before and will never collect.
Governor Ganduje eventually approached the court to stop further investigation by the House of Assembly, which vowed to continue the probe.
The development generated reactions from stakeholders in the Nigerian project, including the Peoples Democratic Party, PDP, which asked the federal government to investigate the allegation against the governor.