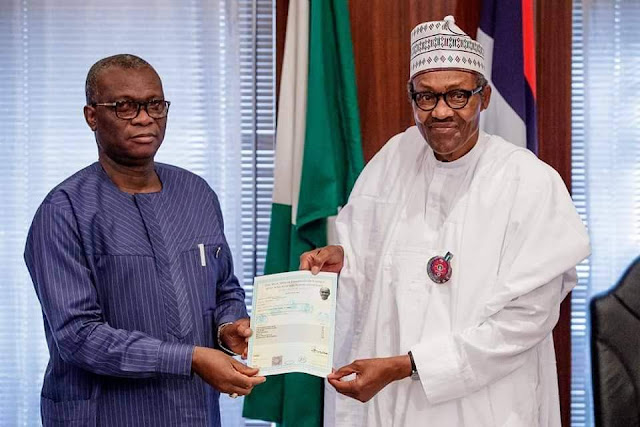 WAEC ’s spokesman, Damianus Ojijeogu, stated this in an interview with Punch newspaper on Saturday.
Ojijeogu, in the interview said, “We would not have given him the document if he didn't apply. It is only Buhari or a court that can ask for the results. There is no other person. So he asked for it.”
Also, WAEC said in issuing an Attestation of Results to replace a lost or missing WAEC certificate, the subjects, where the candidate had F 9, would no longer be captured.
WAEC Nigeria said these on its Twitter handle, @waecnigeria, on Saturday, while answering questions from several Nigerians on the omission of F9 from Buhari ’s attestation.
“That is WAEC Twitter handle. It is correct,” Ojijeogu added, confirming the authenticity of the post on the handle.
The documents were presented to the President at the Presidential Villa, Abuja, during a courtesy visit by a delegation of WAEC led by its Registrar, Dr. Iyi Uwadiae.
Uwadiae was accompanied by the Head, National Office, WAEC, Olutise Adenipekun; Head, Public Affairs, WAEC, Abiodun Aduloju; and the Zonal Coordinator, WAEC Abuja, Olufemi Oke.
Buhari received the documents amidst the controversy generated over his claim in his details presented to the Independent National Electoral Commission that his credentials were with the Military Board.
The board had subsequently declared the President’ s certificate missing, hence the need for him to get an attestation and a confirmation.
Earlier on its Twitter handle on Saturday, the examination body had stated, “You cannot apply for Attestation of Results or any other document if you have not registered and sat for the examination.
“The documents for application are a letter of application, police report on lost or damaged certificate, photocopy of lost or damaged certificate, two recent passport- sized photographs of the candidate, sworn affidavit for collection of attestation of results and administrative fee of N 20,000. ”
But the Presidency, which spoke through Buhari’s Senior Special Assistant on Media and Publicity, Garba Shehu, said the initiative to make the documents available to the President was that of the examination body.
Shehu , in an interview with Punch on Saturday, said WAEC authorities made it clear that they read about the controversy generated by the President ’s missing certificate and saw the need to save the council ’s integrity.

The presidential spokesman added, “No, the President did not apply for the documents. I made this clear in an opinion I wrote on Friday.
“The presentation of the documents to the President was strictly an initiative of WAEC.
“They said they read about the controversy on the pages of newspapers and saw the need to save the integrity of the council.”
Shehu had, in an opinion, titled ‘President Buhari, WAEC and PDP ’s toxic air’, on Friday, quoted the examination body as saying that the controversy concerning Buhari’s school certificate was embarrassing and felt a sense of duty to produce and deliver the documents to him.
He had said, “This is a god - send, with WAEC being a non- political entity. This should put to rest the absurd allegations by the Peoples Democratic Party, brought up again and again, that he (Buhari) did not attend a secondary school.”
WAEC said the controversy surrounding the President’s picture was due to a guideline that the council used the photograph of the applicant for the attestation and not the pupil ’s picture as of the time of sitting for the examination.
WAEC also said it did not issue the attestation of results to Buhari in 2015 because there was no application for it.
It said, “WAEC does not record fail in certificates. He (Buhari) did not apply for it in 2015. In August 2015, the council introduced Attestation of Results that can be obtained on request and that can serve as a replacement for lost or missing certificates.
“It should be the passport photo he (Buhari) submitted during the application for Attestation of Results. Attestation of Results carries passport of the candidate ’s application when he or she applied. Candidates were first issued Attestation of Results by WAEC Nigeria in 2015.