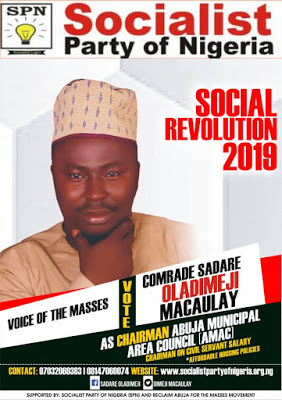 The Socialist party of Nigeria SPN has assured Abuja residents that it will introduce rent control to curb the increasing cost of accommodation in the Federal Capital if its candidate, Dimeji Macaulay is elected as chairman of Abuja Municipal Area Council AMAC during the area Council elections next year.
A statement released by Akande Daniel Babatunde; the Campaign Director for the Chairmanship Candidate, said the party will massively Invest in Public Housing and introduce rent control for the Working People and the Poor masses.
While lamenting the 1.7 million housing deficit in the FCT, the statement added that the housing crisis is a huge problem for the poor and the working people in Abuja with more than half of the population living in precarious houses.
Below is the full statement:

PRESS STATEMENT
SPN government if elected will massively Invest in Public Housing and introduce rent control for the Working People and the Poor masses.
Housing crisis is a huge issue for the poor and the working people in Abuja with more than half of the population living in precarious houses.&nbsp; We have 1.7million housing deficit.
Despite being fundamental and constitutional by the Nigerian government which had formulated a National Housing Policy in 1991 to ease the provision of adequate, accessible and low-cost housing for the poor and the working people.
Yet, millions are homeless, while others live in homes that have been precariously built in terrible places that have life threatening environmental issues, no thanks to the capitalist government.
It should be noted that according to the FCT Minister, Muhammad Bello at the 12th Abuja Housing Show in Abuja on 16th of July, 2018, the National Housing Policy that made the provision of adequate, accessible and affordable housing have been amended in 2004 where he claimed a more market-oriented approach had been adopted which limit the role of public sector and allow more private sector to participate in direct housing provision.
What that implies is that the fate of getting decent and affordable housing by the poor and the working people has been shattered, hence, the poor and the working people expend more than 60percent of their disposable income on house rent as a direct consequence of a huge housing deficit in Abuja; also most people live on the street, in the slum area(s), and far communities where they can get cheap but precarious houses. About 88% of those working in the main town of Abuja Municipal Area Council (AMAC) do not live within the&nbsp; major towns in AMAC, and the reason for this is unaffordability of the rent and associated high cost of living. In a place like Wuse2, two bedroom flat ranges from #2million to #2.5million and more, while in Maitama it could go as high as #10million to #11million as compared to similar two bedrooms flat in Jikwoyi which is around #180 thousand to #200thousand and in Karu #250thousand to #400thounsad etc.
Today, what is visible is rising rent, vacant houses and homeless people in every part of Federal Capital Territory, Abuja. Many of the houses in communities and streets are owned by top ranking elements among the ruling class most of which are not occupied.
The government unleashed attacks on them through Environmental bodies which chase after homeless people every day and night. We also have cases where poor people have been literally thrown out because they could not pay the high-rising rent.&nbsp; Meanwhile, many houses lack even basic facilities, such as water, sewage, electricity, while being substandard, tiny and overcrowded.
According to the present AMAC Chairman Mr Abdulahi Candido budget report which was reported by Premium Times on January 11, 2018 which stated among other things the amount budgeted to the works and housing department which got #1.8 billion. Despite being the highest, this in the real sense does not reflect in the supervision or provision of any critical infrastructure which can make life easy for the working people and the poor.
For instance, aside major roads in Abuja, there are no other motorable roads. This do not only cause fatal accident to the populace in most villages and communities in Abuja, but also have negative effects on the Agricultural farm produce which as a result of lack of accessible roads become economic loss for the farmers, this also continue to impoverish the farmers.
Ironically, this is happening in the Federal Capital Territory (FCT), Abuja where #6.92billion was budgeted for 2018 fiscal year.
As socialists, we believe this is not accidental, it is due to long term and continuous implementation of neo-liberal policies the Nigeria governments at every level, which have grossly underfund the housing sectors as well as promote private interest at the expense of the housing needs of all.
The Socialist Party of Nigeria (SPN) if elected are going to massively invest in housing and regulate house rent in the heart of Abuja. Create jobs for people that have technical skills.
SPN candidates if elected, will earn the salary of an average worker and we believe that if we can make reduction of privileges enjoyed by political class, cancellation of Security Votes, and end to fraudulent contract system, all these are enough not only to invest massively on affordable housing, but also to implement free and quality education, free and quality health services at all levels, and also it is enough to employ Nigerians with at least #30,000 as minimum wage without retrenchment.