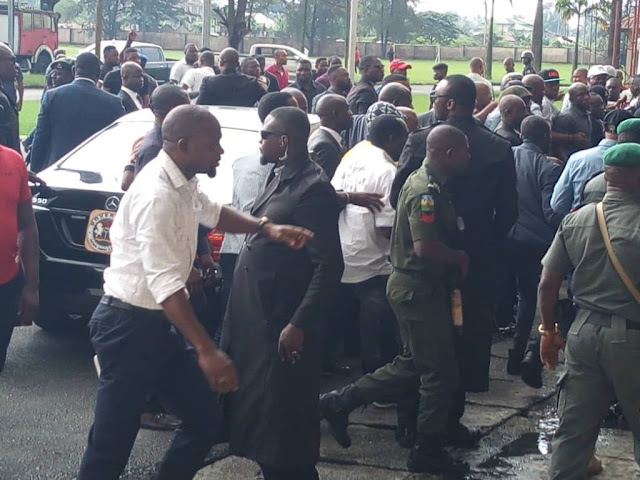 There were gunshots and pandemonium in the Akwa Ibom House of Assembly, Uyo on Tuesday, as five of the lawmakers whose seats were earlier declared vacant met and commenced impeachment proceedings against the state Governor Udom Emmanuel.
The atmosphere, however, became rowdy when the governor arrived at the assembly complex at Udo Udoma Avenue.
The News Agency of Nigeria learnt that immediately Gov. Emmanuel entered the premises, gunshots were fired by those described by eyewitnesses as security operatives and thugs who were around the premises.
According to the witnesses the newly acclaimed speaker, Mr Nse Ntuen, who had earlier sat with the four other lawmakers, was also harassed by security personnel in the assembly premises.
Ntuen’s vehicle was said to have been damaged while he escaped a mob action by some persons believed to be Peoples Democratic Party members.
The eyewitnesses said : “As the governor entered the assembly hall, youth started shouting ‘eight years, eight years.”
Some journalists who were in the assembly for the day’s duty had to scamper for safety.
The Police Public Relations Officer in the state, DSP Odiko Macdon, who was in the assembly premises, however, said he was gathering information and had yet to speak.
Trouble started in the house on Nov. 19, when the Speaker, Mr Onofiok Luke, declared vacant, the seats of the five lawmakers who defected from the PDP to the All Progressive Congress.
The assembly complex was also cordoned off by the police to protect lives and property.