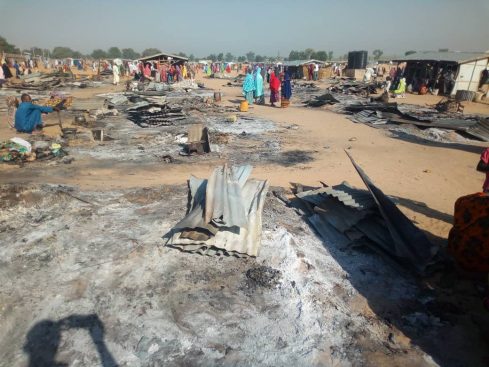 Insurgents believed to be Boko Haram fighters attacked Kofa general areas in Konduga local government area of Borno State on Wednesday night, including an Internally Displaced Persons (IDPs)’s camp.
A Daily Trust reporter who visited the area Thursday morning, said at least, 13 civilians were killed in the attack while over 40 makeshift tents in the Dalori 2 IDPs camp were burnt down by the invaders.
Daily Trust gathered that dozens of IDPs were still missing.
Bukar Kashim, a displaced person at Dalori 2 IDPs camp, said the security personnel at the camp were overpowered by the invaders, adding that they shot and killed an old man in his presence.
“We thought it was normal shooting but it turned out to be Boko Haram”, he told Daily Trust. “Everyone was in disarray, they entered after the security and CJTF [Civilian Joint Task Force] were overpowered, one person was killed and about 40 tents were burnt.
“The government need to rise and protect us. This is an evidence that we are not safe anymore. We are begging President Buhari to protect us.
“Many of our people are yet to return and we don’t know their fate,” Bukar lamented.
A resident of Bulabbrin village, Usman Modu who wept profusely while speaking to our reporter, said he lost three of his children.
“They were fully armed,” he said of the insurgents. “Each of them had two guns and shooting sporadically. I ran into the bush, leaving my family behind but when I came back this morning, three of my children were burnt.
“In this village, we lost nine persons. They killed four others in Kofa and adjoining villages were burnt down,” Modu said.
The Military is yet to confirm the attack.