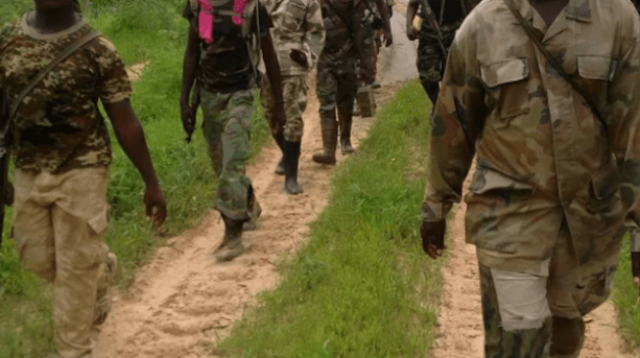 One of the soldiers who escaped the deadly attack on the military formation in Metele in Borno state has narrated how he escaped.
Over 100 soldiers attached to 157 task force battalion were reportedly killed in the attack while the armoury at the formation was looted.
The Islamic State in West Africa Province (ISWAP) had claimed responsibility for the attack.
The soldier who spoke off the record said more than 100 of his colleagues fled the attack.
The soldier accused the military authorities of lying to the public about the insurgency in the north-east, calling on President Muhammadu Buhari to act.
“Most of our people dropped their arms and pulled off this dirty uniform… the bodies of our troops littered everywhere but we watched the news and heard army headquarters saying troops repelled the attack,” he told TheCable.
“The army chief and other generals only sit in Abuja and lie to Nigerians whereas soldiers are being killed on daily basis. We lack manpower but nobody is telling the president the truth.
“The president should demand the whereabouts of all the soldiers deployed to Operation Last Hold to fight Boko Haram under Major General Abbah Dikko. The answer is, all of them have been crushed by Boko Haram and their new weapons and arms are what the Boko Haram is using to attack us. Please, help us tell Mr President that the service chiefs are just lying to him.”
Another soldier said he and his colleagues engaged the insurgents in a gun battle for 40 minutes but they eventually ran out of ammunition.
He said troops at the formation were alerted about the attack, one hour before the insurgents struck.
“Our commander, Lieutenant Colonel Sakaba told us to prepare for battle after being briefed by one of our soldiers whose duty is to monitor what is coming from distance,” he said.
“We engaged the terrorists for over 40 minutes before we ran out of ammunition on that very Sunday. They were well equipped and armed with rocket propelled grenades, more than 12 gun trucks mounted with anti-air craft shooting at us from a long range.
“Some of us ran out of bullets and they overpowered us, we fled but those who could not escape were slaughtered like chicken.
“Our formation is surrounded by big trenches and barbed wires, which became a trap and made it difficult for them to escape. I watched many of my fellow friends die helplessly in cold blood.”
Another soldier who wants to be identified as God's child, said it was a miracle that they survived the onslaught.