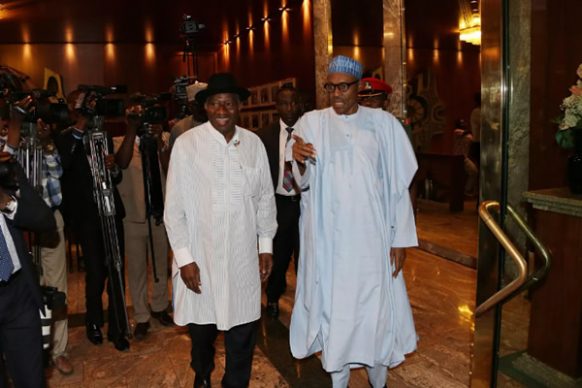 President Muhammadu Buhari on Tuesday in Abuja hailed his predecessor, Dr Goodluck Jonathan, for voluntarily conceding defeat in the 2015 general elections, describing him as a true democrat.
Buhari said this at the unveiling of a book titled “My Transition Hours” by Jonathan. The book launch was attended by hundreds of guests from outside and across the country.
Represented by the Secretary to the Government of the Federation, Boss Mustapha, the president said Jonathan’s act of courage had made him a patriotic leader and earned him popularity among Africans and other leaders.
“You are a leader of the past, of now and of the future; you will rise again; I wish you the best you wish yourself, ” Buhari said.

He called on Nigerians to see elections as contests, which should be done in a free, fair and peaceful environment.
He said Nigerians should eschew bitterness, bigotry, hate speech and “promote Nigeria for us and generation yet unborn.”
Jonathan in reaction condemned any act of inducement of voters and vote buying during elections in the country, adding that the act was contrary to democratic norms and therefore, wrong.
The event was graced by hundreds of prominent Nigerians, including former Heads of state Abdulsalam Abubakar, Yakubu Gowon, ex-President Olusegun Obasanjo and the Peoples Democratic Party presidential candidate, Atiku Abubakar.
The All Progressives Congress National Chairman, Adams Oshiomhole, former Vice President Namadi Sambo, Senate President Bukola Saraki, ex-PDP governors and many members of the political class, traditional rulers and members of the diplomatic corps also graced the event.
NAN