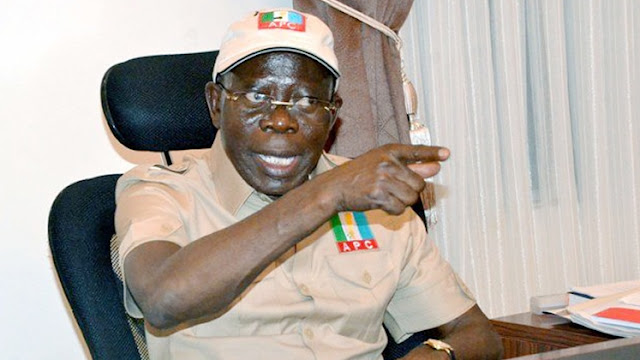 The National Chairman of the ruling All Progressives Congress, Adams Oshiomhole, on Friday lashed out again at the governors of Imo and Ogun states, Rochas Okorocha and Ibukunle Amosun.
This came barely 24 hours after the two governors renewed their attacks on the APC chairman.
While Okorocha claimed on Thursday that the fortunes of the APC had witnessed a downturn since Oshiomhole took over as national chairman, Amosun alleged that the party chairman and his cohorts were working towards handing over Ogun to “a gang of expansionists.”

In an apparent response to the two governors, Oshiomhole described their personal attacks on his person as a direct result of their failure to foist undemocratic processes on the party.
Specifically, he described governor Okorocha as “an embarrassment” to the APC with his failed attempt to elicit APC ’s support to help him build “a political dynasty” as well as his needless personal feud with the institution of the church in his state.
Oshiomhole spoke at a media briefing in Abuja, on Friday.
He said for the avoidance of doubt, the party’s National Working Committee had met and upheld the outcome of the party primaries conducted by the Ahmed Gulak -led panel sent to the state by the NWC to conduct the exercise.
The national chairman said, “Governor Rochas Okorocha, the chairman of the Progressives Governors Forum is a beneficiary of the court process, we rescued him. The primary conducted by my predecessor completely swept governor Okorocha out of the system -from ward, local government to the state.
“What I am not able to do for Governor Okorocha is to assist him with the instrument of the APC to help him to build a political dynasty.”
Consequently, he said, “We have prepared the name of Senator Hope Uzodinma and submitted to the INEC.
“If governor Rochas chose to relocate to the Villa and use the grounds of Villa to try to intimidate me to create a dynasty, I won’t accept it. I will uphold the truth in the best interest of the APC members and indeed of the APC people in Imo State. The truth does not require a supporters’ club to stand, it has its own legs, and it can stand.”
In the case of Ogun State, the APC national chairman said the state governor was trying to act like an emperor. He said the APC under his leadership did not have a place for emperors.
He accused the governor of attempting to lord it over the majority of party members in the state by brazenly imposing candidates for virtually all elective positions in the state.
According to Oshiomhole, the governor held a stakeholders meeting as required by the APC National Executive Committee but went on to do the bizarre.
Oshiomhole said, “At the meeting, this is no secret, I expect that some of your media houses will have video clips of what transpired at that meeting because it wasn’t a closed -door meeting, it was an open meeting. Governor Amosun in his wisdom decided to introduce ‘third element’ which didn’t feature in the resolutions of the National Executive Council.
“He announced that Ogun State was going to adopt consensus and he proceeded to define what in his view constitute a consensus.
“And having defined it to mean the pronouncement of the governor, he went on to announce what, according to him, represents a consensus candidate. He announced one Akinlade as the next governor. He proceeded to announce another gentleman, whom he said would be the deputy governor, consensus!

“He went on to proclaim himself as the next senator through consensus and he says the current senator in his own Senatorial zone, Senator Tejuoso, will step aside so that he, Ibikunle Amosun, at the end of his tenure as governor of Ogun State, will proceed to the Senate. According to him, this is his own consensus.
“He went on to also announce that the second Senator also, from Ogun State will step aside and another gentleman will come in place of that senator. And according to him, this pronouncement is a consensus.”
Oshiomhole further said, “Not done, governor Amosun went on to announce a particular gentleman, who will be the next Speaker. He went on to announce another one who will be the next deputy Speaker of the state House of Assembly.
“Governor Amosun, according to his own definition of consensus, also unilaterally pronounced that of the eight seats of House of Representatives members, seven will not return according to him, only one will return. This he claimed is a consensus.
“He went on to list other members of the House of Assembly who will seek re -election and those who will not seek re -election. All through, he announced about 40 names which according to him constitute consensus.”
The APC chairman described Amosun’s actions as “undemocratic, immoral and an abuse of power.”
He also said, “Our constitution does not recognise emperors. There are not emperors in the APC, if anybody attempts to invent himself as an emperor, it will be an enterprise in futility.
“Based on our rules, we have since conducted primaries and submitted the name of the winner, Prince Dapo Abiodun, to INEC for the purpose of the forthcoming governorship election that for me has concluded that matter.”

On the Supreme Court judgment with respect to Rivers State, he said “As a political party we respect the judiciary, we also appreciate the truth and the facts. Democracy is basically about the celebration of the rule of law not the rule of might. If it is rule of might people like me, who both vertically and horizontally challenged, cannot survive. So, as a party we believe in the rule of law.
“And based on this commitment, which is not really a choice, we are obliged to respect the rule of law. And at the heart of that is total obedience to the letter and to the spirit of judicial findings. And judicial findings are not meant to be convenient. “In a democracy, they are orders which are meant to be obeyed.Therefore, the judgment by the supreme court in which from the first to the last page of the judgment is very clear that the Supreme Court has nullified the ward, local and state congresses that were done by my predecessor in Rivers State.
“It also nullified the state and the local government congresses that were done because according to the findings by the Supreme Court, those congresses were done in spite of a subsisting Court Order.
“What is important is that, as things stand, the highest court of the land has pronounced that those congresses did not meet the requirements of the law. And therefore they are not valid.
He added, “As a law -abiding party, we have accepted the decision of the Supreme Court, and we will call a meeting in no distant future of all the stakeholders in Rivers State to prepare them and to put the necessary machinery in place to conduct fresh ward congresses across all the wards in Rivers State, and of course, thereafter conduct the state executive congress in line with the provisions of the constitution of the All Progressives Congress. These, we have to do in full obedience of the judgment of the Supreme Court.”
Oshiomhole also apologised to the judiciary for the attack on the High Court in Port-Harcourt but said the thugs who took part in the attack were neither members of the APC nor did they enjoy the party’s support.
The APC national chairman, however, assured Nigerians that his party would defeat the candidate of the main opposition Peoples Democratic Party in the next year presidential election.

Meanwhile, the All Progressives Congress on Friday submitted its list of governorship candidates to the Independent National Electoral Commission.
In the form CF 001 which was submitted to INEC, Senator Hope Uzodinma was presented as the Imo State governorship candidate to the chagrin of Okorocha.
Also, Mr. Abiodun Akinlade, the preferred candidate of Amosun, had his hopes dashed as the ruling party submitted the name of Mr. Dapo Abiodun.

Meanwhile, Zamfara State again presented no list of the APC candidates following the decision of INEC to bar the party from fielding any candidate in the state.
The APC also failed to present any list of candidates for Rivers State following the Supreme Court ruling nullifying the outcome of the primaries.
The deadline for the submission of names of candidates lapsed on Friday, November 2.
According to INEC timetable and schedule of activities, November 17 is the last day for the substitution of names of Presidential and National Assembly candidates while December 1, 2018 is the deadline for substitution of names of governorship and House of Assembly candidates.