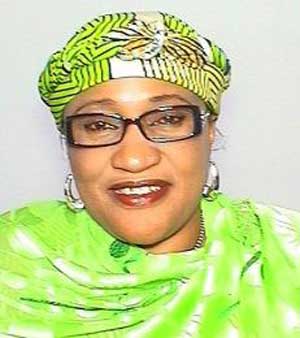 Minister of Women Affairs and Social Development, Senator Aisha Alhassan, also known as Mama Taraba, has resigned from President Muhammadu Buhari’s cabinet and from the ruling All Progressives Congress.
Alhassan hinged her resignation on her disqualification in the screening for the 2019 Taraba state governorship contest by the APC National Working Committee.
Alhassan
She said she was axed without any viable or genuine reason.
“If I am not good enough to contest elections in the APC, then I feel I am not also qualified to remain a minister in the APC government,” she stated.
She thanked the president, her ward executives and other members of the party for the opportunity given her to serve.
Aisha Alhassan was the governorship candidate of the APC in the 2015 election in Taraba State.
She was the only one disqualified by the NWC out of 12 aspirants slated to run in the primaries scheduled for tomorrow.

Aisha Alhassan may however have incurred the wrath of the party when she declared in a BBC Hausa Service report last year September that she would support former vice-president Atiku Abubakar for the presidency, instead of President Buhari.
Abubakar is now a presidential aspirant, among a dozen other aspirants in the Peoples Democratic Party.
She said her choice of Abubakar was predicated on the fact that the former Vice President is her “godfather.”
“Atiku is my godfather even before I joined politics. And again, Baba Buhari did not tell us that he is going to run in 2019.
“Let me tell you today that if Baba said he is going to contest in 2019, I swear to Allah, I will go before him and kneel and tell him that ‘Baba I am grateful for the opportunity you gave me to serve your government as a minister, but Baba just like you know, I will support only Atiku because he is my godfather. If Atiku said he is going to contest.”
On the possibility of losing her job for rooting for Abubakar in 2019, Alhassan said, “If because of what I said, I am sacked, it will not bother me because I believe in Allah, that my time has elapsed that is why.
“Baba is not a mad man like those calling for my sack. They have been sending it and spreading that if Baba sees this I will be sacked.”

However, Buhari declined to sack her for the statement and she also reportedly went to beg the president to retain her job.
The remaining aspirants in the Taraba governorship race: