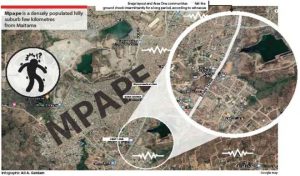 The National Space Research and Development Agency (NASRDA) has identified communities in four states and Abuja as locations where major earthquake may likely occur in the country.
The Director General of NASRDA, Prof. Seidu Mohammed, disclosed this on the sideline of the second Engr. Brig. Gen. M.O Agu (rtd) Annual Distinguished Lecture in Abuja on Thursday.

Prof. Mohammed, who was also the chairman of presidential committee on the Abuja tremor, said Mpape in Abuja, Kwoi in Kaduna, Ijebu-Ode in Ogun, Shaki in Oyo and Igbogene in Bayelsa may likely be the epicentres of major earthquake if precautions were not taken.
The erstwhile inactive faults system in the country are gradually becoming active, he said, ‘’which now make earthquake likely’’ in and around the country.

A number of incidences in these locations, according to him, is also a pointer to the fact that a big disaster may occur there, calling on the Federal Government to do something fast to avert it.
He said analysis of a 100 year-old data done by the members of the presidential committee on Abuja tremor showed that Mpape in Abuja is a hotspot which is highly susceptible to earth tremor and other earth shakeups.
“What it means is that we need a thorough study across the country to identify such hotspots so that we can constantly monitor them from satellite system and from data from outer space’’, he said.

He said the high volume of water being taken out of over 110, 000 boreholes dug in Abuja is further making the situation in the capital city worse.
‘’More than 330 metric tonnes of water being taken out every day in Abuja is causing a vacuum; is straining the earth’’, he said.
He therefore urged the FG to take a look at indiscriminate drilling of boreholes, calling for thorough regulation on earth drilling.
He also said engineers should now take cognizance of likely earth tremor when designing and constructing buildings.
Last week, the Presidential Committee on Abuja Tremor said Nigeria was now prone to seismic hazards, which make earthquake occurrence a potential disaster to the country.
The committee disclosed that when it submitted the report of its findings to the Minister of Science and Technology, Dr Ogbonnaya Onu.
‘’Nigeria is now prone to seismic hazards following recent earthquake occurrences in Kwoi, Kaduna state, Saki, Oyo State and Igbogene in Bayelsa State all in 2016.
The latest occurred in September 7, 2018 in Mpape, Abuja’’ it said.
It said though ‘’these earthquakes may have been of low-magnitude, it is now certain that earthquake occurrence has become a potential hazards to the nation’’.
The committee alluded to the report conducted by Julius Berger on the geological, hydrological and geotechnical investigation for Abuja which identified Mpape as a Shear zone that is weak with several fractures and faults system.
It added that water extraction and recharge imbalance from aquifer is causing hydrological instability along the fractures.
The existence of 110,000 boreholes within Abuja metropolis with about 330,000 metric tonnes of water drilled daily is not suitable, it added.
In view of the challenges that hinder efficient forecasting, detection and monitoring of earthquakes in Nigeria, the Committee recommended the procurement and installation of more seismometers and GPS sensors/equipment for the enlargement and networking of the Nigeria National Network of Seismographic Stations.
The committee further recommended detailed Seismotectonic study using State-of-the-art equipment in the area and the entire country.
Other recommendations made by the Presidential Committee are:
An integrated study should be carried out to properly delineate the fault systems in the area while ensuring that building should be constructed with the right engineering design and materials on approved sites.
Infrared satellites technology: Space management data for earthquake monitoring are showing more prospect. It is advised that this technology must be adopted and funded adequately.
At present, there is no Nigerian Code of practice that cover Nigerian Seismic building code. There is urgent need to be established the Nigerian Standard for the seismic building code. An agency such as the Nigerian Building and Road Research Institute (NBRRI) should be given the responsibility with budgetary allocations provided.
Earthquakes happen all the time. The key is to monitor, identify and catalog their location so that we can improve on future forecasts in time and space.
To do this we need to upgrade the infrastructure of the current seismic network system to state of the art digital seismic network with real time telemetry capabilities.
Ecological Funds should be released very urgently for Earthquake Monitoring and Hazard Assessment in Nigeria.
Based on the results obtained using the probability of recurrence theory of Abuja via indiscriminate sinking of boreholes because this has been the primary reason for the stress build up leading to the Abuja tremor of 5th-7th September, 2018.
Government should release fund for the training of Geophysicists, Geologists, Engineers, Technologists and Researchers to participate in earth science research, in order to improve poor understanding of Nigerian and West African geophysics and tectonics dynamism. We emphasize that this research has crucial societal value as evident in earthquakes hazards readiness and mitigations.
Federal Government of Nigeria should take proactive and not reactive measures.
The Federal Government should empower relevant research Agencies mandated to carry out studies into the remote causes of the tremor and proffer solutions.