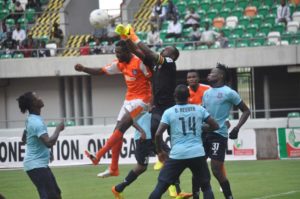 An emergency joint consultative meeting of the League Management Company (LMC), the 20 Nigeria Professional Football League (NPFL) participating Clubs and members of the Nigeria Football Federation(NFF) Executive Committee resolved amongst many other far reaching decisions to declare Lobi Stars as the country’s representative in next season’s CAF Champions League.
The meeting was called against the backdrop of the adverse circumstances in the administration of football in the country, which resulted in the indefinite suspension of the resumption of the (NPFL) leading to huge fixture congestion for both league and cup competitions.
The second of the six point resolution of the meeting was that none of the 20 NPFL Clubs shall be relegated to the lower league.
The meeting also agreed that four Clubs shall be promoted from the Nigeria National League(NNL) to bring the number of the NPFL Clubs for the 2018/19 season to 24.
It was also resolved that the 2018/19 PFL season will commence in November 2018 with a total of 24 participating teams which shall be divided into two groups of 12 teams each. The 2018/2019 Season commencing November 2018 will be played on 22 Match days ending with a Play off to determine the winner by May 2019
Also resolved at the meeting was that three teams from each group (a total of six) will be relegated from the NPFL after the conclusion of the 2018/2019 season, while two teams will be promoted to the NPFL from the NNL 2019 Season. This will allow the NPFL to revert to the normal structure of 20 teams as from the 2019/2020 season.
To achieve harmony in the overall national football calendar, the NFF endorsed the 2019 AITEO CUP to commence from September 2018 and to end on October 14, 2018. The NPFL Teams would be seeded for the CUP competition and the Winner to represent Nigeria in the 2019 CAF Confederation Cup starting November 2019.
The decisions according to the communique signed by Shehu Dikko, the Chairman of LMC and NFF 2nd Vice President were reached to address “the situation which has made it practically impossible to meet up with the deadline for the submission of the list of the country’s representatives to CAF Inter-Club Competitions and also the need to commence the 2019 season in earnest to meet with the CAF new caleandar that runs from August to May of the following year”.
By this decision, the 2017/18 NPFL season has been deemed concluded at Match Day 24 which was already played before the disruption.
Dikko noted that in view of representations made, the LMC also took into consideration the overall physical well being of the players to go through the rigours of such congested fixture as demanded by the exigencies to meet the CAF deadline for submission of the member countries representative for inter club competitions.
“It became imperative for us to put into consideration the health of the NPFL players who would have to go through the rigours of tortuous travels, hectic games schedule and of course the club finances which has been thrown off balance by the unforceen circumstances imposed by the crisis in football administration that led to the situation”, the LMC Chairman further clarified.
The communique noted also that the decisions were reached in accordance with Rule B15.23 of the Framework and Rules of the NPFL, which states that, “any matter unforeseen or not provided for or, conflict in the interpretation and application of these Rules, shall be dealt with by the LMC as the circumstances require, having regards to the interest of fairness, good sportsmanship and the overall interest of the game of football.
On the strength of Rule B15.23, the relevant provisions of the competition fixtures, particularly as contained in Rules A2 (league structure) and A3 (the competition) were suspended.
It will be recalled that the 2018 NPFL season Calendar released in December 2017, the LMC had structured the NPFL Calendar for 2018 to commence January, 2018 and end September, 2018 with a break for the 2018 World Cup between June 4 to July 18, 2018.
However, the schedule was disrupted due to the adverse situation Nigeria football found itself making it impossible for the league to resume July 18, 2018 as scheduled.