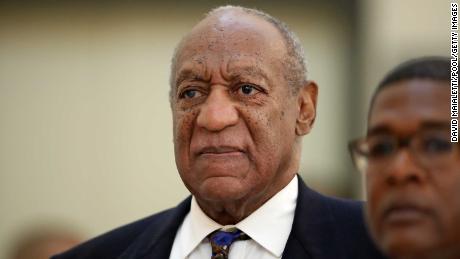 Entertainer Bill Cosby, once known as "America's Dad," was sentenced Tuesday to three to 10 years in a state prison for drugging and sexually assaulting Andrea Constand at his home 14 years ago.

Cosby's bail was revoked and he was escorted from the courthouse in handcuffs.

"This was a serious crime," Montgomery County, Pennsylvania, Judge Steven O'Neill said. "Mr. Cosby, this has all circled back to you. The day has come, the time has come."

Cosby, convicted in April of aggravated indecent assault, declined to speak to the court prior to the sentence. His attorneys have filed an appeal. He also was ordered to pay a fine of $25,000 plus the costs of prosecution as part of the sentence.

Once a groundbreaking actor, Cosby was accused by dozens of women of drugging and sexually assaulting them over his decades as a powerful media figure. However, most of those cases occurred outside the statute of limitations.

Cosby was convicted in April of three counts of aggravated indecent assault for drugging and assaulting Constand at his home in 2004, in the first high-profile celebrity criminal trial of the #MeToo era.

"No one is above the law, and no one should be treated differently or disproportionally," O'Neill said.

Cosby's spokesperson Andrew Wyatt unleashed on the media, judge and prosecutors after the sentence, calling the prosecution "the most racist and sexist trial in the history of the United States." He also said Cosby was doing well because "he knows that these are lies."

Gloria Allred, the victims' rights attorney who represents several women who say they were assaulted by Cosby, praised the sentence.

"We're glad that judgment day has finally come for Mr. Cosby. Mr Cosby has shown no remorse and there has been no justice for many of the accusers who were barred from a court by the arbitrary time limits imposed by the statute of limitations.

Ahead of the sentencing, Constand wrote a five-page letter to the court explaining how Cosby's assault and the ensuing legal battle had changed her life.

"Bill Cosby took my beautiful, healthy young spirit and crushed it. He robbed me of my health and vitality, my open nature and my trust in myself and others," she wrote.

O'Neill cited Constand's statement in deciding on the sentence.

"I have given great weight to the victim impact testimony in this case, and it was powerful," he said.

Kathy McKee, a former actress who has accused Cosby of raping her, told CNN that listening to the news about Cosby's sentencing stirs up some "very difficult and deep emotions."

"I'm happy that the judge sentenced Bill Cosby accordingly and I'm grateful to Andrea for standing strong," she said.

"We are grateful that the court understood the seriousness of Cosby's crime and sentenced him to prison," said Jodi Omear, vice president of communications at RAINN. "Let's hope that the legacy of this case is that victims feel empowered to come forward, knowing that it can truly make a difference in bringing perpetrators to justice."

Prosecutors had asked the judge on Monday to sentence Cosby to five to 10 years in state prison for the assault, saying he had shown "no remorse" for his actions. However, Cosby's defense attorney, Joseph P. Green, asked for a sentence of house arrest, citing Cosby's advanced age and blindness.