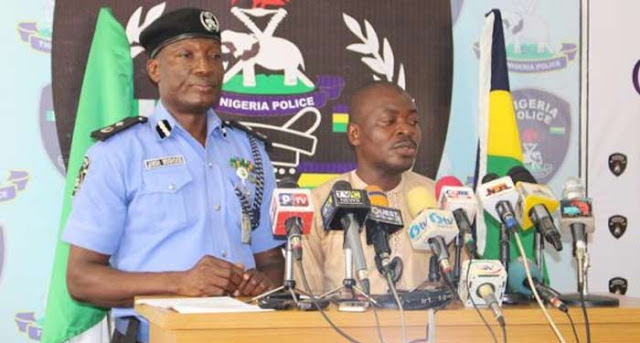 An informant, Ismail Yakubu, has narrated how he instigated the raid on the residence of the elder statesman and Ijaw leader, Chief Edwin Clark, by armed policemen on Tuesday in Abuja.
The 45 -year - old indigene of the Federal Capital Territory explained that a taxi driver informed him that a sealed Toyota Hilux was conveying arms and ammunition into the Asokoro, Abuja residence of the Niger Delta leader.
This, he added, prompted him to alert the IGP Special Tactical Force ’ which conducted a two-hour search of the building. The search, however, yielded nothing.
Yakubu who claimed to be a member of Waru traditional council disclosed how he got the information about the purported arms at Clark ’s residence while being paraded by the Force Public Relations Officer, Jimoh Moshood in Abuja on Wednesday.
He said, “The point is that I was going to Asokoro on Monday exactly 4 pm. I was called to come and receive a message at the back of ECOWAS. I took a taxi from Apo roundabout.
“When we were on our way, I was in front and two other passengers were in the car. I noticed that the whole street was blocked and then I began to ask questions to know what was happening.”
Yakubu further stated, “It was then the taxi man said the street is where the Niger Delta people are living. I probed further to know why the road was blocked and rowdy. He then pointed out to me to see the truck entering the compound, the compound was House 43. The truck was a white Hilux van and it was sealed. The driver said the road was blocked because the van was trying to enter the compound.
“The driver said the van was filled with ammunition. As an indigene of the FCT and hearing the information. I thought to myself that why ammunition in the FCT because residents of the FCT are peace -loving people. I said I cannot take that. I asked how sure he was and he said he was sure and that was why the whole area was blocked.
“On Tuesday morning, I met Inspector Sada and I narrated what I saw. I told him that I got the information from a taxi man. I told him the address and they went there to investigate.”