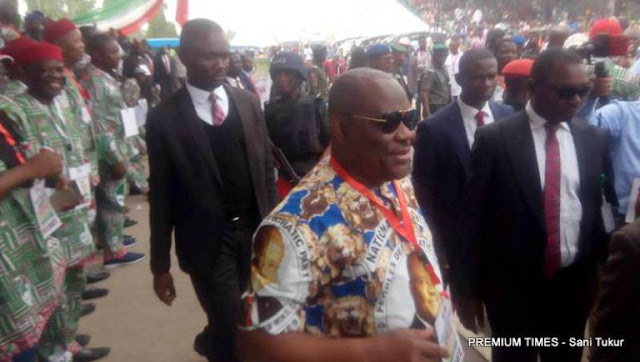 Governor Nyesom Wike has apologised to leaders and presidential aspirants of the Peoples Democratic Party for his anti-party outburst on Wednesday.

At a National Executive Committee meeting of the party Friday afternoon, the Rivers State governor showed remorse for his comments and assured party leaders he would be more guarded going forward, those who attended the meeting have informed PREMIUM TIMES.

“When we demanded apology from him, he apologised and the party has reconciled,” Okwesilieze Nwodo, a former chairman of the PDP who attended the NEC meeting today told PREMIUM TIMES.

Mr Nwodo, a former governor of Enugu State, said it was after Mr Wike’s apology that the party went on to have a “unanimous decision” to move the party’s convention for election of presidential candidate to Port Harcourt, at the heart of Nigeria’s oil-rich Niger-Delta.

“He apologised at the meeting and promised to refrain from such comments from now on,” another source who was present at the meeting told PREMIUM TIMES under anonymity because he assumed speaking on record could damage his friendship with Mr Wike.

Mr Wike sparked political tension amongst PDP leaders and presidential aspirants when he said on Wednesday that the presidential primaries must hold in Port-Harcourt, saying unequivocally that any contrary venue would be politically costly for the PDP at next year’s presidential election.

Although some of the party’s over a dozen presidential aspirants held reservations about the outburst, they were reluctant to openly confront him, PREMIUM TIMES learnt, preferring instead to keep their misgivings away from the media.

“It is unfortunate that this man is behaving like he owns the party, but he would soon learn that no man is an island and a man who is indispensable has not been born,” a presidential aspirant told PREMIUM TIMES by telephone Friday night.

The aspirant, who was amongst those present at Friday’s NEC meeting, said he accepted Mr Wike’s apologies, but would rather not publicly confront him to avoid fueling a simmering rancour.

A spokesperson for Mr Wike did not immediately return requests for comments Friday night.

Several presidential aspirants feared holding the convention in Port-Harcourt could give Mr Wike an edge to install his preferred aspirant.

While those against the choice have been largely quiet, preferring only to discuss it with close associates or use political action groups to write antagonistic opinions in the media, those who were comfortable with Port Harcourt have publicly stated their position.

“Even if the venue is Sri Lanka, we are okay with it so long as it is PDP presidential convention,” Musa Elayo, a former minister and campaign director for Mr Lamido, told PREMIUM TIMES Friday.

Senate President Bukola Saraki also said he was not opposed to Port Harcourt as convention venue. The top lawmaker told reporters shortly after Friday’s NEC meeting that he was satisfied with the arrangement, adding that someone apologised after tempers flared at the meeting, although he did not say it was Mr Wike.

Mr Wike also stirred controversy on Wednesday when he said in addition to his threats that some aspirants had no intention of fulfilling their promise to restructure Nigeria.

“You come here to deceive us about restructuring. Just that Rivers State is a venue, you fight it,” Mr Wike said while receiving Gombe State Governor Ibrahim Dankwambo, who is also running for president as he wraps up his two-term tenure next May. “Then, when you are there, what will happen? You think we are fools where you preach restructuring, then when you get the position, you abandon restructuring.”

His comments appeared a veiled attack on former Vice President Atiku Abubakar, who is considered a front-runner in the race for the main opposition’s ticket. At least two officials in Mr Atiku’s campaign and one aide to Mr Wike admitted to PREMIUM TIMES under anonymity that the Rivers governor was aiming at the former vice president.

“He is the toughest man in the party now, he has shown it over and again,” Mr Olubanjo said. “The party has been through terrible phases since it lost power in 2015. We would see whether the governor would be able to single-handedly return its fortunes in a few months’ time.”

Mr Wike’s judgement has been viewed with skepticism amongst party leaders since the controversial role he played in installing Ali Sheriff as chairman in early 2016 plunged the party into a protracted chaos that nearly rendered it defunct.

But he was believed to have played a crucial role in the legal battle to regain the party from Mr Sheriff’s control, which dragged for several months all the way to the Supreme Court. Mr Sheriff had since returned to the All Progressives Congress, from where he joined the PDP.

Mr Wike also helped ensure the election of Uche Secondus as the party’s chairman during its last convention in December 2017. Although Mr Secondus’ emergence generated widespread anger amongst the party’s loyalists in the South-west, the internal wrangling was immediately quelled by the reconciliation committee the party raised soon after the convention.