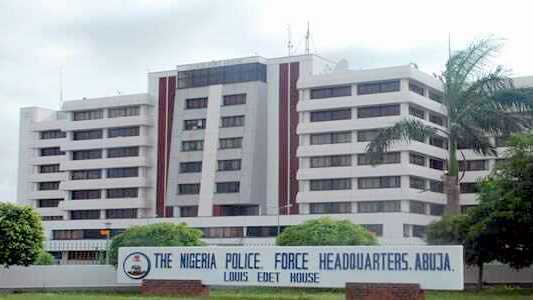 On the day the Nigerian presidency was complaining about the excesses of a unit in the police, the same unit was forcing a PREMIUM TIMES journalist to disclose his source.
The Nigerian police, through the Special Anti-Robbery Squad (SARS) on Tuesday arrested and detained Samuel Ogundipe, who covers the security sector.
Apart from Mr Ogundipe, this newspaper’s editor-in-chief, Musikilu Mojeed, and its education correspondent, Azeezat Adedigba, were also briefly detained and manhandled by the police at the SARS headquarters in Abuja.
Ms Adedigba was later released after about three hours of detention.
Mr Mojeed and Mr Ogundipe were driven from the SARS headquarters in Abuja to the IGP Monitoring Unit at Force Headquarters where Mr Ogundipe was made to write a statement.
At the Force headquarters, a DCP at the IGP Monitoring Unit, Sani Ahmadu, was heard directing lawyers to “rush to court” to obtain a warrant to detain Mr Ogundipe.
They repeatedly asked the journalist to disclose his source for a story published by this newspaper .
The story, also published by other media, revealed a letter written by the Inspector General of Police, Ibrahim Idris, to Acting President Yemi Osinbajo on last week’s siege to the National Assembly by security officials.
When Mr Mojeed alerted the DCP that it was wrong compelling a journalist to disclose a source of information, the police officer became furious threatening the journalist.
“He said the police was acting within the law and that Samuel would remain detained unless he discloses those who gave him the document,” the journalist said.
Officials at the police headquarters told PREMIUM TIMES that the directive to detain the journalist came directly from the Inspector General of Police who is said to be angry at this paper’s critical reporting of his activities.
Moves to arrest Mr Ogundipe started on Saturday, August 11, when a Police Superintendent, Emmanuel Onyeneho, phoned a PREMIUM TIMES journalist, Azeezat Adedigba, requesting her to show up at their station.
PREMIUM TIMES management had then insisted that the request be formally sent to it so the reporter could honour it on Monday.
A formal of invitation letter from an Assistant Commissioner of Police, Sanusi Muhammed, said the police was investigating a crime of which her name and number was involved.
“This office is investigating a case of criminal conspiracy, cybercrime, attempted kidnapping and fraudulent act that your name and phone number featured.
“You are kindly requested to interview the undersigned officer on 14th August 2018 by 1000hrs for fact findings,” the letter reads.
It turned out it was all a lie when the reporter arrived at the SARS office as directed.
As early as 10 a.m. Monday morning, the reporter, in the company of Mr Mojeed and another staffer was at the SARS headquarters, Guzape, but was told the investigating officer, Emmanuel Onyeneho, was not available.
An armed operative (ostensibly on directives), who attended to the trio subsequently confiscated Ms Adedigba’s phone and detained her, after physically manhandling PREMIUM TIMES editor-in-chief, who attempted to intervene.
After she was led in, the editor and the staffer had to wait for over four hours before Mr Onyeneho eventually sauntered in.
Subsequently, the official, who declined giving details on the reason for the invitation requested that Ms Adedigba dial a number, he provided, with her phone. The dialled number turned out to be that of Mr Ogundipe. The official requested that Mr Mojeed ask the reporter, to come down, a request he immediately obliged.
Immediately, Mr Ogundipe came in, Ms Adedigba was allowed to go while Messrs Mojeed and Ogundipe were detained.
It was at this point that the two were notified that the police were investigating the source of the interim report sent by the IGP on Mr Daura as published by Premium Times.