Man Treks From Lagos To Abuja Against Buhari's 2019 Ambition 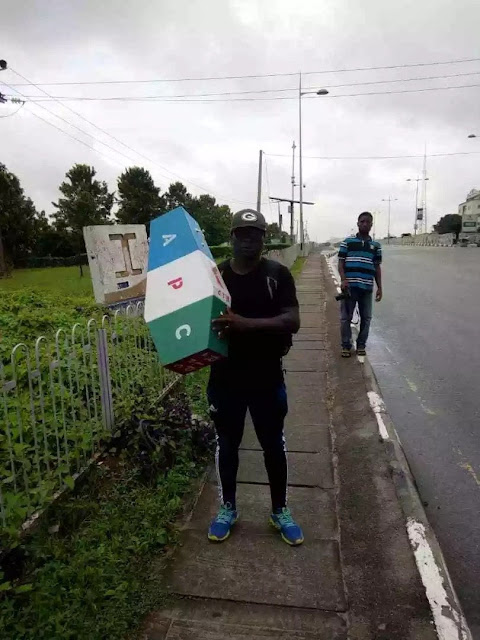 A 28-year-old man bearing a mini-coffin has begun a road journey, on foot, from Lagos to Abuja to express his displeasure against President Muhammadu Buhari’s government.
Mohammed Isa, who hails from Borno State, said he is embarking on the journey to express his anger towards the president and his party, the All Progressives Congress (APC).
“They promised us heaven and earth but gave us hell,” he told journalists on Thursday, as he was about to begin his trip from the Otedola Bridge in Lagos.
“They promised that fuel will be N45 Naira per litre but it’s now N145 Naira; they promised to create three million jobs in one year but they have not been able to create even 500,000 jobs in three years.”
In 2015, Mr Isa announced he trekked from Lagos to Lokoja in solidarity with the then governor-elect, Yahaya Bello.
At the time, Mr Isa, whose mother hails from Kogi State, said he did so because he felt the APC was capable of changing the political and social narrative of the country. He added that since Mr Buhari became president, he had become “a total stranger.”
“I am very angry at everyone in the APC and I will not vote for anybody from APC or PDP because they are all the same,” he said.
“I will campaign for someone with the youths at heart.”
Sporting a green faze-cap atop a black and blue sportswear while clutching a wooden mini coffin under his arm, Mr Isa told the over half a dozen journalists who had been invited to witness the take-off of his journey that he expects to be on the road for over one month.
“The youths of this country are as angry as I am with the APC government. After school, no job nothing yet they promised us change.”
On the political undertone of his trek, Mr Isa said although he is trekking against the APC government and President Buhari, he is not in any way being sponsored by any politician.
“I am doing everything I’m doing with my own money. When I trekked for the APC in 2015, I did that because I believed they will change the country, I didn’t ask the APC to do anything for me, I only asked them to make Nigeria better.
In the aftermath of the 2015 general elections, a handful of youth embarked on a solidarity trek across the country in support of their candidates.
While Mr Isa said he trekked from Lagos to Lokoja, a journey that lasted 14 days; Suleiman Hashimu said he walked from Lagos to Abuja over 18 days to celebrate Mr Buhari’s victory.
Oladele Nihi said he trekked from Abuja to Otuoke, the hometown Goodluck Jonathan, to honour the former president as “a hero of democracy.”
Mr Isa said he is now regretting his 2015 road trip for the APC because “they have greatly let us down.”
“I’m trekking now because they have failed Nigeria and Nigerians and I want Nigerians to know that even I, who believed so much in their government and put my health at risk by embarking on the trek is rejecting their government and that is why I’m carrying a coffin of the APC to deposit it at any mortuary within Abuja because the APC is dead already.” 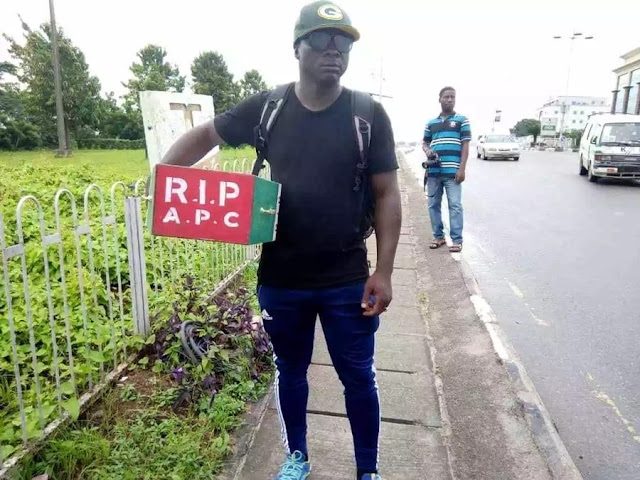