How Ex-SSS Boss Daura Was Arrested 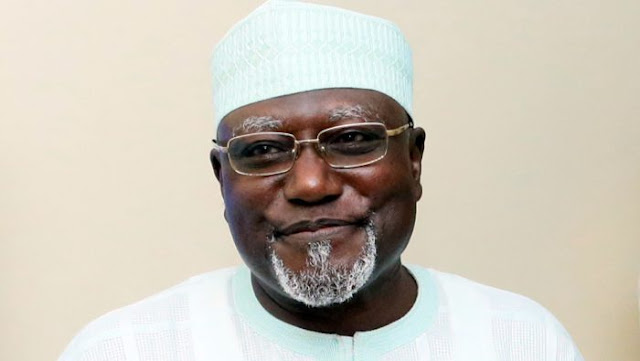 The plot was like that of a movie, leaving trained security and intelligence officials confused. At the end of it, Lawal Daura, then head of one of Nigeria’s foremost security agencies was whisked away while his well trained security aides waited for him.
Multiple sources at the Nigerian Presidency have told PREMIUM TIMES how Mr Daura, former Director-General of State Security Service, (SSS), was sacked and arrested on the orders of Acting President Yemi Osinbajo on Tuesday.
Mr Daura was sacked after masked SSS operatives laid siege to the National Assembly complex preventing lawmakers and civil servants from gaining access into the building.
The siege was only lifted about an hour after Mr Daura’s sack.

OSINBAJO OUTRAGED
Sources at the presidential villa said Mr Osinbajo, who has been in charge since President Muhammadu Buhari proceeded on a 10 day vacation to the UK, was outraged by the actions of the SSS.
“When the siege began, the acting president quickly went to action and was able to gather preliminary information of what was going on after which he invited some of the security chiefs concerned for a briefing,” one of the sources said.
He said those invited include the Inspector-General of Police, Ibrahim Idris and the former DG, Mr Daura. PREMIUM TIMES earlier reported Mr Osinbajo’s meeting with both officials.
The source also said the acting president was briefed earlier by National Security Adviser, Babagana Monguno.
“When Lawal Daura came in, the acting president asked him who cleared him to order operatives to lay siege on the National Assembly; and his response was ‘shocking’.
“He simply said it’s within his powers and that he is only answerable to the President and Commander-in-Chief who appointed him,” the source said.
The source also said unknown to Mr Daura, the acting president had already spoken to Mr Buhari after initial reports indicated that Mr Daura “was in play with President of the Senate, Bukola Saraki.”
After his response, Mr Osinbajo told his media aide, Laolu Akande, to immediately issue a statement announcing the sack of Mr Daura.
“The acting president also asked the National Security Adviser to hand over the sacked DG to the police for further investigation,” he said.

DAURA ARRESTED
Another source at the Villa , who witnessed the drama that followed the directive from Mr Osinbajo, said as soon as his arrest was ordered, the Aide De Camp (ADC) to Mr Osinbajo was seen rushing to the ceremonial gate, where the Mobile Police Force office is located.
“The ADC returned to the VP wing with some mobile police officers in a rush and asked that a vehicle should be brought immediately to the rear area for (Daura’s) evacuation.
“We thought the VP, who is the only one whose convoy uses that place, was about to go out and there was a need for additional vehicle. An SUV was ‘scrambled’ but the ADC said they should bring a tinted Hilux van,” he said.
Meanwhile, the source said Mr Daura ‘s convoy and personal security were waiting for him, like they normally do, at the administration gate (a separate one from the ceremonial gate) not knowing what was going on inside.
“All of them thought the DG was still meeting with the acting president until the convoy was asked to return to headquarters empty,” he said.
Another source, a former director in the SSS who worked with Mr Daura, said he (Daura) is currently being detained at the Federal Special Anti-Robbery Squad (FSARS), in Abuja.
“The fact that he was handed over to SARS and not detained in a guest house (for high profile suspects) should give you an indication of how the government is handling this matter. He is now considered a suspected serious criminal,” he said.
He also said a combined team of both the police and SSS “would have begun interrogating Mr Daura by now.”

THE REPLACEMENT
PREMIUM TIMES on Tuesday reported how Mr Daura’s security details returned to the SSS headquarters without their principal.
A senior official at the SSS said the security details, after waiting for Mr Daura to come out from the meeting with the vice president, simply received an order from a director at the agency that they return to the agency’s headquarters.
By then, an acting Director-General had been named for the SSS.
Matthew Seiyefa, was until his appointment the director in charge of the Institute of Security Studies (ISS), an institution established in 2005 as the cardinal training institution for the SSS.
Mr. Seiyefa was the most senior official at the SSS after Mr Daura. He briefly
met with Mr Osinbajo on Tuesday .
The acting DG, an indigene of Bayelsa State, was director of operations between 2007 and 2010 when Afakriya Gadzama ran the agency.
With about 34 years experience, Mr. Seiyefa served in different other capacities, including being state director in Osun, Akwa Ibom, and Lagos States.
He is also a member of the National Institute, having studied at the National Institute for Policy and Strategic Studies (NIPSS), Kuru.
Insiders at the SSS said he is close to retirement, and was indeed billed to proceed on terminal leave later this month.