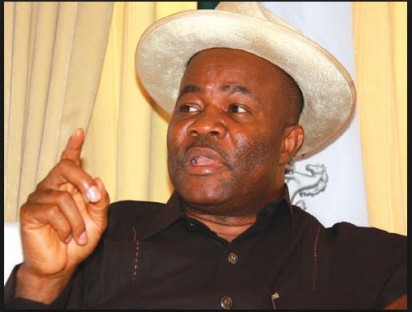 Gunmen reportedly stormed the country home of Senator Godswill Akpabio, on Tuesday, around 7.30 p.m., in Akwa Ibom State, where he was holding a political meeting.
Akpabio’s media aide, Anietie Ekong, took to
Facebook on Tuesday night to raise the alarm.
Mr Ekong wrote on the social media site: “On-going, sporadic shooting by gunmen at Ukana Ikot Ntuen, Essien Udim Local Government Area of Akwa Ibom State, country home of former Senate Minority Leader, Senator Akpabio.
“The Divisional Police Officer, Essien Udim and the Commissioner of Police Akwa Ibom State should please urgently intervene.”
But reacting, yesterday, the state Commissioner of Police, Mr. Adeyemi Ogunyemilusi, denied allegation that suspected gunmen attacked Akpabio’s residence, disrupting a high profile political meeting, Tuesday night.
According to the Commissioner of Police, the political meeting lasted till the early hours of yesterday, amid tight security following gun scare about 200 metres to Senator Akpabio’s residence in his hometown, Ukana Ikot Ntuen, Essien Udim council.
It was alleged that gunmen on motorcycles had shot randomly, causing prominent politicians to run for their lives, and forcing the meeting to be temporarily halted for about one hour.
Although there was exchange of gunshots by security officials at the meeting, the Commissioner of Police explained that six hoodlums on two motorcycles had invaded a filling station near Akpabio’s house and robbed the attendants of the day’s sales.
“It was just a mere coincidence that the incident happened about 7.30p.m., August 21, when the meeting was ongoing at Senator Akpabio’s residence.
“Immediately the hoodlums attacked the filling station, somebody at the meeting called me. The Area Commander and other policemen were drafted to the scene and within minutes, security was restored.
“You know how Ikot Ekpene is with these hoodlums on motorcycles. So, it was just a flash incident of petty thieves robbing a filling station near the residence of His Excellency.
“Even our quick response was applauded by His Excellency when he came out of the meeting to see our men on guard around the area. So nobody should overheat the polity because of politics,” the CP warned.
Meanwhile, the media Aide to Senator Akpabio, Mr. Anietie Ekong, who said that there was shooting around the vicinity, noted that “the Police arrived early to bring the situation under control.”
Reacting, an official of the Peoples Democratic Party, PDP, who does not want his name in print said the former governor of Akwa Ibom State who defected from the PDP to the APC a fortnight ago, had suddenly realised that he made a fatal political error, hence his penchant for “Baseless utterances.”
He said: “Senator Akpabio is hallucinating and he doesn’t seem to know where he is politically today. He made a fatal political error and not knowing what else to do, he is now making baseless utterances.”
APC, in its reaction by its state Chairman, Ini Okopido, condemned in very strong terms the unprovoked attack on Akpabio’s residence, while normal consultations with party leaders and stakeholders was ongoing.
“The APC family will not tolerate such unwarranted attack on any of its members/leaders. The hoodlums while shooting sporadically around the environment, robbed passersby and a nearby petrol station. Even though the incident was promptly reported to the State Commissioner of Police by DIG Udom Ekpoudom (retd), who witnessed the attack and the CP responded by sending police reinforcement to the scene. Such action by unguided miscreants is unacceptable and condemnable. Politicians should play by the rules of the game to forestall reprisal attacks.”