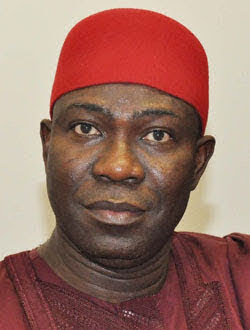 Reports say Ike Ekweremadu, Nigeria’s deputy Senate president, was permitted to go home after being questioned from morning till evening Tuesday by anti-graft detectives on Tuesday.

But the lawmaker was asked to return on Wednesday morning for further interrogation at the the Economic and Financial Crimes Commission’s headquarters in Abuja, two senior officials told PREMIUM TIMES Wednesday morning.

“We were not satisfied with the answers he gave us yesterday, but we extended an administrative bail to him,” one source said. “We are, however, waiting for him to return today for the second day of clarification.”

Mr Ekweremadu turned himself in at the EFCC office Tuesday morning, following days of tension between him and operatives working on leads they said suggested a pattern of questionable acquisition of properties within and outside Nigeria.

The politician has denied wrongdoing, accusing the EFCC of being on a witch-hunt to weaken his political stature.

A source at the EFCC said the agency would not be distracted by Mr Ekweremadu’s “desperate attempts to politicise” a potential case of stealing in public service being unearthed against him.

Several properties linked to Mr Ekweremadu have reportedly been uncovered in multiple jurisdictions, including the United Kingdom, United States and the United Arab Emirates. Operatives questioned him specifically on this throughout yesterday, it was learnt.

Mr Ekweremadu said most of the properties, which were traced by the presidential panel on recovery of fraudulently-acquired properties, were “fictitious,” but failed to clarify which of them actually belonged to him, or whether they were appropriately declared in his asset declaration filings.

EFCC officials could not immediately say when Mr Ekweremadu would appear today as scheduled, but said they have no concerns that he may not appear at all.

“We granted him the bail based on acknowledgement of his office,” an official said. “It would not be in his best interest to keep our investigators standing by shunning further appearances.”