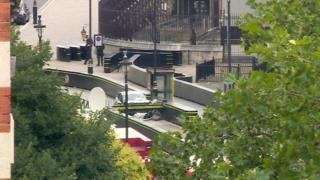 A man has been arrested on suspicion of terrorism offences after a car crashed outside the Houses of Parliament.
The vehicle swerved into cyclists and pedestrians shortly after 07:30 BST, injuring three people.
The suspect, in his late 20s, is not believed to be known to MI5 or counter-terrorism police, and is not co-operating with officers.
One woman is being treated in hospital for serious but non life-threatening injuries.
Scotland Yard's head of counter terrorism Neil Basu said : "Given that this appears to be a deliberate act, the method and this being an iconic site, we are treating it as a terrorist incident."
He added there was "no intelligence at this time of further danger" to London or the UK as a whole.

The suspect, who has not been formally identified, is being held at a south London police station and the vehicle is being searched.
No-one else was in the car and no weapons have been found. The government's Cobra emergency committee is meeting later.
A number of eyewitnesses have said the silver Ford Fiesta, which was travelling westbound, appeared to deliberately hit members of the public as it swerved into the opposite lane.
Footage released by the BBC shows the moment when the car drives over a pedestrian crossing before crashing into the security barriers. A police officer can be seen jumping over another barrier to get out of the way.