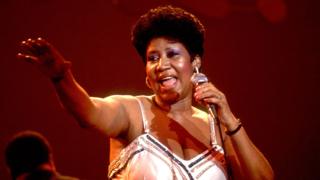 Aretha Franklin, the "queen of soul" known for hits like Respect and Think, has died in Detroit at the age of 76.
The legendary singer was diagnosed with cancer in 2010 and announced last year she was retiring from music.
Franklin had 17 Top Ten US chart hits over a music career spanning seven decades.
The star gave her final performance last November at a gala in New York held in aid of the Elton John Aids Foundation.
In a statement, her family said: "In one of the darkest moments of our lives, we are not able to find the appropriate words to express the pain in our heart.
"We have lost the matriarch and rock of our family. The love she had for her children, grandchildren, nieces, nephews and cousins knew no bounds."
The family also confirmed her death was due to advanced pancreatic cancer of the neuroendocrine type.