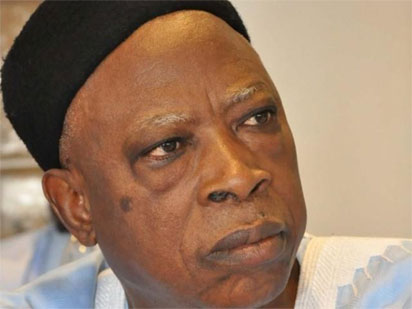 Senator Abdullahi Adamu (APC-Nasarawa) has called for a probe into the allocations to the National Assembly in the last couple of years.
Speaking to newsmen in Abuja on Sunday, Adamu alleged that the allocation to the federal legislature has been muddled up.
He accused the President of the Senate Dr Bukola Saraki, who is the Chairman of the National Assembly of ‘messing up’ the allocation to the National Assembly.
“I call for a forensic audit of the finances of the Parliament which has been thoroughly messed up by the President of the Senate Dr Bukola Saraki who is the Chairman of the National Assembly,” he said.
Adamu insisted that Saraki’s influence had completely diminished, stressing that it was in view of that that he called off the resumption of the Senate last week.
He argued that the only reason Saraki was still the President of the Senate was due to the privileges he enjoyed.
“He has lost the respect and confidence of majority of senators and well-meaning Nigerians, but he’s just latching on to that seat (of Senate President) because of the privileges he enjoys.
“Ordinarily, Saraki needed not wait for any pressure to be mounted on him before he resigns from his position as Senate president.
“You can’t command any respect or assert your authority as a leader when majority of those you’re supposed to lead have lost confidence in you and are opposed to your leadership.
“So, if he’s a self-respecting person, he doesn’t even need anyone to ask that he should throw in the towel because he and his PDP have lost majority in the Senate,” he said.
According to the former Nasarawa State governor, Saraki is entitled to aspire to any office in the land, including that of the President of the Federal Republic of Nigeria, “but he shouldn’t try to destroy the system just because he wants to realise that ambition at all costs”.
On who succeeds Saraki, if he exits from his seat as Senate President, Adamu said: “you don’t cross a bridge before you get to it.
“All the speculations about the purported rift is aimed at dividing us and distracting us from our determination to assert the interest of our party which enjoys the majority in the Senate,” he said.
While reacting to the recent Senatorial bye-elections conducted in Katsina and Bauchi, the lawmaker said it was a sign of victory for the ruling All Progressives Congress (APC) come 2019.
“They were the clearest pointers to the victories that would be recorded by President Muhammadu Buhari and the ruling All Progressives Congress (APC) during the 2019 General Elections.
Adamu further said that his party’s victory was not only “remarkable”, but also point to the confidence that the nation’s citizens had in Buhari and in the APC administration.
He however called on the APC to make frantic efforts to reduce the level of poverty in Nigeria.
He also stressed the need for the ruling party and the Executive to intensify efforts on implementation of economic enhancement programmes of the Buhari administration.
“The APC needs to urgently, after the vote of confidence reposed in it, accelerate our efforts to empower the ordinary citizens in order to reduce the level of poverty in the land.”
“I think this is the time for our party, the APC to galvanise all our teeming members, especially members of Mr. President’s cabinet to accelerate our pace in executing capital projects as another avenue for deepening the rising public confidence in the administration,” he said.