2019: I‘ll Sign Undertaking To Do One Term If Elected President- Atiku 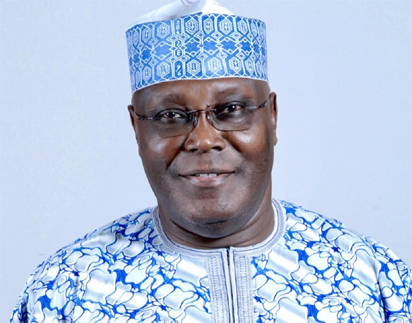 The former vice president, Atiku Abubakar, Sunday vowed to spend one term in office if elected president in the forthcoming 2019 election.
“If I am elected as the President in 2019, I give an undertaking that I would only do one term. Having said that let me remind Nigerians that Buhari also gave such an undertaking in 2011, but he is not living up to it today. My own case will be different. I am prepared to sign an undertaking to do only one term.”
In an interview with ‘Thisday’, Atiku promised to revitalise and restructure Nigeria’s education system, noting that a minimum of 21 per cent of the federal budget would be devoted to education.
His words,“I pledge that if I am chosen by my party, the Peoples Democratic Party, to be its presidential candidate, and if I am subsequently elected as the President by Nigerians, I will go above and beyond the United Nations’ recommendations and ensure that a minimum of 21 per cent of the federal budget is devoted to education.
“Beyond that, I will reserve 10 per cent of that amount to further and continuous education for our public school teachers. Nigeria’s education sector must progress from creating job seekers. We must train our teachers to train our children to be job creators as well.
“As for the specifics, for the last 10 years, Nigeria has budgeted the equivalent of $30 billion at the federal level, give or take. Twenty-one per cent of that is about $6.5 billion. I already mentioned to you that if elected as the president, I would sit with the heads of the legislature and the judiciary for the purpose of coming to an agreement on how we can scale down our overheads.
“On the side of the executive, there are so many things we can cut down on. Recently, I wanted to go to Azerbaijan and I found out that they don’t have an embassy in Nigeria or any other country near Nigeria. To get a visa, you apply online to their foreign office.
“Nigeria maintains literally hundreds of embassies and foreign missions in multiple nations that we really do not need. We can close down two-thirds of these missions and have one embassy service as many as four nations in the geographic vicinity. We can use technology to provide consular services.
“In 2018, we budgeted N63 billion for recurrent expenditure in foreign affairs. Under an Atiku presidency, we would spend only a quarter of that. The rest will go to education.
“In the same budget, we are spending N1 trillion paying salaries for our military and paramilitary officers and men, and less than half of that paying salaries in the education sector.
“As an educator, I see the problem immediately. The less you spend on education the more you have to spend on security. The more you spend on education the less you have to spend on security.
“It is interconnected. We are having to spend so much on defence because over the years we have not invested enough in education. Beginning from my first year, I will reverse that. The money will be re-channelled to education.
In the 2018 budget, we have N112 billion going to the Office of the Secretary to the Government of the Federation. To do what? Award grass cutter contracts? Under an Atiku administration, whoever is the Secretary to the Government of the Federation just has to find a way to manage 10 per cent of that money.
“ The rest will go to education. I am serious about this. This is not rhetoric. I have achieved it in my private capacity as an educator and if given the chance, I will replicate it in Nigeria’s public sector.”
Similarly, when asked of his agenda for Nigerians Atiku opined, “My agenda is centred on jobs. That is what I have been doing for the past 40 years. I am first and foremost an entrepreneur.
“A job creator. My group of companies has a workforce of about 50,000. This does not include the hundreds of thousands that are indirectly employed.
“I believe in creating jobs, providing opportunities, being united as one Nigeria, and securing it all with a military-industrial complex whose raison d’être is ‘Nigeria First.’”