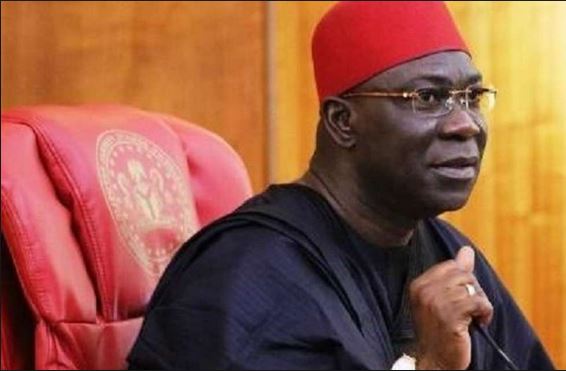 The Deputy President of the Senate, Senator Ike Ekweremadu, has described the Peoples Democratic Party, PDP, as the fastest growing political party in Africa.
He said what the nation witnessed in the last few days, being the defection of scores of federal lawmakers and the return of the Governor of Benue State, Samuel Ortom, to the PDP was “a tip of the iceberg”.
He spoke at Awgu, Enugu State on Saturday during the inauguration of the Agwu Local Government chapter of the Gburugburu Movement, which champions the reelection of Governor Ifeanyi Ugwuanyi.
He said: “Spirits have been high within the PDP family and Coalition of United Political Parties, CUPP, for sometime now, especially following the joining and rejoining of the PDP and the coalition by scores of National and State Assembly Members as well as the Governor of Benue State.
“We are happy for this. But I have good news for you. Nigerians have only witnessed a tip of the iceberg. More are on their way because it is no longer about anybody’s individual political ambition. It is now a movement to rescue Nigeria. So, we are not only the biggest political party, we are also the fastest growing political party in Africa.
“I want to assure you that so many respected Nigerians have also keyed into this movement to rescue Nigeria because the world is now very worried for our nation.
“So, in a matter of months, Nigerians will go to the polls to enthrone a new order of peace, unity, security, and respect for the rule of law”.
Ekweremadu also assured the Governor of Enugu State of the total support of the entire Enugu West Senatorial District, adding that not only would nobody from the district contest against the Governor, but the people of the zone would also obtain the party’s nomination form for the governor at the right time.
“Not long ago, the entire Enugu West Senatorial District gathered here to endorse Governor Ugwuanyi for a second term. So, we can only say that we remain committed to that decision. He has done very well and deserves a second, straight term in office”, he stressed.