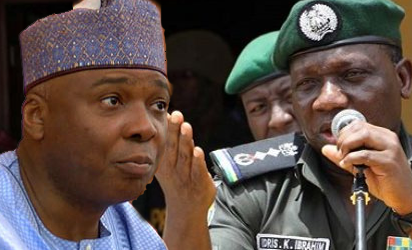 The Nigeria Police Force has again invited the President of the Senate, Bukola Saraki to report to the Head of investigation team, Inspector-General of Police Response Team (IRT) on July 24 at 8 a.m. in Guzape, Abuja.
The invitation is in connection to bank robbery in Offa Kwara state which left several people dead.
The armed robbers attacked five commercial banks in Offa on April 5, during which 17 persons, including policemen and a pregnant woman were killed.
Saraki was invited over confession made by some suspects in the robbery that they were his political thugs.
A statement signed by the Inspector-General of Police, Mr Ibrahim Idris, on Monday in Abuja, said that the invitation was aimed at making further clarification on the matter.
“In your response to the above allegations, you stated ” by virtue of my participation in politics, I have a large followership which makes it impossible for me to know all of them.
“For the records, your letter under reference did not include the full text of the statements made by the accused persons.
“After a careful perusal of your letter to the Police, it was discovered that the statement requires further clarification and coupled with the fact that you stated that the full text of the statements of the suspects were not shown to you.
“It is imperative you report to the Police to make further statements after giving you the full text of the statements of the suspects,” he said.
“It is in line with the above that you are requested to report to the head of the Investigation Team at the Intelligence Response Team’ at Guzape, Abuja,” he said.