Macron’s pilgrimage to the Afrikan Shrine 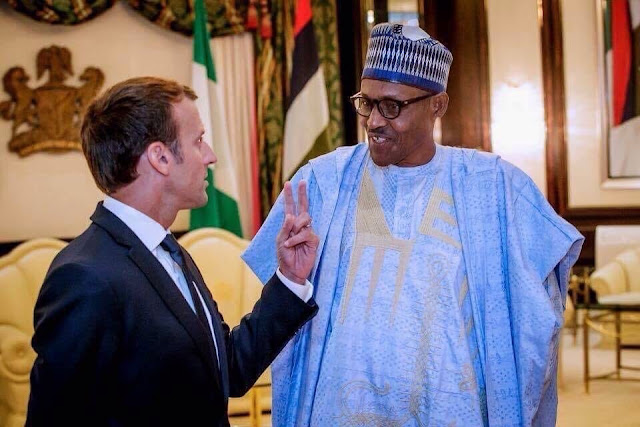 It is night in the mega city of Lagos, the city that never sleeps. It is Tuesday, July 3, 2018. Emmanuel Macron, President of the Republic of France, one of the world’s most powerful leaders, takes a late flight to Lagos, and walks into the New Afrikan Shrine. He had come to the roots of Fela Anikulapo-Kuti, the iconic cultural ambassador and ‘Black President’ who joined his African ancestors, twenty one years ago.

The French leader who had served in Nigeria in 2004, seven years after Fela became an ancestor, wore a white shirt and a tie, sat against the background of African drums and musical instruments and gave a pep talk how our cultural workers including Nigerian musicians, journalists and actors can change the African narrative by telling our own story ourselves. As the night wore on, the tie was off, shirt sleeves rolled up and Macron swayed to the beats of authentic African music belted out mainly by one of Fela’s sons and worthy musical heirs, Femi Kuti. At a point, Macron gave a brief performance. The event endeared him and France to the Nigerian populace. This was a major diplomatic victory. It registered far more in the consciousness of Nigerians than any other state visit to Nigeria. Usually, state visits are what they are; choreographed visit by one Head of State to another featuring effected courtesies, rehearsed smiles and handshakes, with the people unconcerned or uninterested. The rest of Macron’s visit including meeting with Nigerian President Muhammadu Buhari, his promise to assist Africa especially Mali fight terrorism, talks to enhance Franco-Nigeria Trade and opening of new headquarters of the French cultural centre, Alliance Francaise, became subsumed in this cultural coup; the visit to the Afrika Shrine, the display of African culture and appreciation by Macron.

The visit and the worldwide publicity, firmly puts the Afrikan Shrine on the universal tourism map; if the French President can visit the Afrikan Shrine and appear happy, why not other visitors from France or Europe? It is to the glory of Fela and the continuation of his enviable legacy by his children including Femi, Yeni and Seun. It is also to the glory of Nigeria for producing such an icon. Common sense dictates that the Nigerian state invests in the Shrine and other cultural centres to boost tourism which is a viable alternative to our oil monoculture. A good beginning will be to institutionalize Fela and his legacy very much as South Africa did to Nelson Mandela.

With Macron’s visit, I recall the state visit to France by then Nigerian Head of State, General Ibrahim Babangida, the military dictator who styled himself ‘President’. In his self-glorification, he thought he was on a triumphant visit to France. I was then working in the VANGURAD Newspapers and the State House Correspondent, Ogbeni Tope Awe was on Babangida’s entourage. In those days, the fastest means of sending stories was the telex. Tope ran to a post office in Paris to send his story on the visit. The telex operator called his attention to an ‘error’ She told him he made a mistake on the name of the Nigerian President. Tope checked and it was Ibrahim Babangida he had written. Puzzled, he asked the lady who she thought the Nigerian President was, and she replied “Fela” Babangida despite being dictator, controlling the country’s resources, detaining critics without trial and generally dictating to the country, was outside our shores, generally unknown. In fact, a French newspaper in explaining who Babangida was to the French people, was reported to have said, he was from Fela’s country.

Such was the reach and influence of Fela ‘The Black President’ who through his intellect, musical prowess, commitment to Pan Africanism and social justice, influenced millions across the world and became an international icon.

The French President might have been attracted to Fela’s music, and it is to the greater glory of the African idol and African cultural development, that he visited the new African Shrine dedicated to the latter.

Fela had given recognizable shape to Afro Beat. He regarded his music as an instrument of struggle for the emancipation of Nigerians and the Black People. To him, it was not about making money, indeed those who knew him were aware, he had a sort of disdain for money. He gave out so generously that he could give all he had, and be financially broke. To him, the struggle for emancipation, included African ancestors like Kwame Nkrumah. He therefore thought his club was not merely for social purposes, but also spiritual. So he called it the Afrikan Shrine. He also regarded his band as such, so it was called Egypt ’80 in recognition of the ancient Black Egyptian Civilization that gave birth to modern human civilization. His songs and their titles tell the Nigerian and African story. Fela taught us and sang that Nigeria is a ‘Big Blind Country, BBC’ run by ‘Beasts of No Nation’ using ‘Zombie’ (soldiers) and the notorious police especially in ‘Alagbon Close’ to repress the people in ‘Power Show’ To him, that is why Nigerians are ‘Suffering and Smiling’ and subjected to a life of ‘Sorrow, Tears and Blood’ However he knew that the masses are like ‘Water No Get Enemy” except to their oppressors who are engaged in ‘Trouble sleep, Yanga Go Wake’ leading to a country of ‘Confusion Break Bones’ So, there can be no ‘Agreement’ between the people and their neo-colonial rulers with the struggles ultimately leading to ‘Coffin for Head of State’

On Africa, he locates the problem in the emergent elites who are suffering from ‘Ikoyi Blindness’ just like their returnee colleagues who are merely ’Johnny Just Drop, JJD’ To Fela, the African elite is just ‘Mr. Follow Follow’ or what Franz Fanon characterised as “Black Skin, White Masks” The African elites, Fela sang, are ‘Opposite People’ suffering from ‘Colonial Mentality’ who cannot hear the ‘Black Man’s Cry’ , that is ‘Why Black Man Dey Suffer’ today. Fela loved women, that is why on the African ‘Lady’ it is an ‘Open and Close’ case.

Fela, in death, is remembered and honoured with a visit to his Afrikan Shrine by a sitting French President, in contrast, Babangida who went to France on state visit, is alive, is not visited, and has paled into insignificance even in Nigeria. While Babangida was very rich, controlled the Armed Forces and built mansions including the hill top he lives in, Fela was not and could not afford to build a single mansion. In fact, the new Afrikan Shrine was built after his death. It is a lesson about genuine sacrifice and the need to build a worthy legacy. To serve humanity, is never to die. Fela lives on!