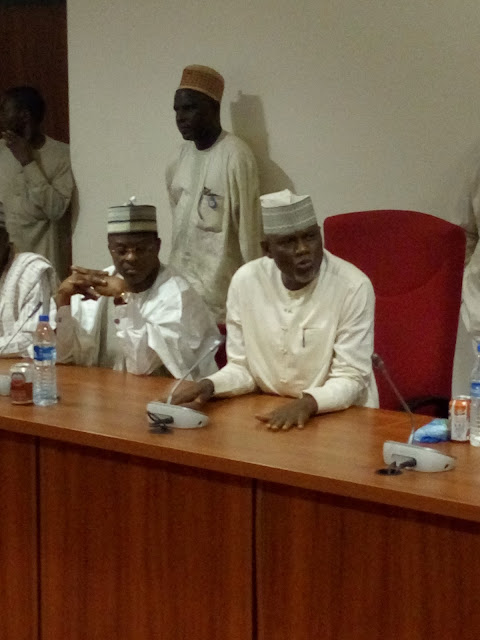 The Senator representing Kaduna North, Sen. Suleiman Hunkuyi has disclosed that plans were being concluded on whether or not he would defect from the All Progressives Congress(APC).

Hunkuyi made this known when he received a delegation of the Peoples Democratic Party(PDP) from Kaduna North.

He said he had detailed discussion with the delegation on how to work together to salvage Kaduna State from poor governance.

Hunkuyi has been having a running battle with Kaduna State Governor, Nasir El-rufai over accusations of injustice and high handedness.

In the course of the battle, the lawmaker's factional party office was allegedly destroyed by the state government.

The lawmaker had also been attacked at different political fora in the state allegedly by party members who are sympathetic to El-rufai.

Senate's non-approval of a foreign loan of 350 million dollars request by the state further affected the already strained relationship between the governor and the lawmaker.

"The PDP members that visited me today are my kin and kin because no story of the party will be complete in Kaduna State without my name featuring prominently at one point or the other.

"The political arena as we know guarantees freedom of participation, association and very shortly we will come up with a position on the direction for our polity, to correct the anomalies in the state.

"The essence of participatory politics in democracy is to create a sense of belonging as no one person is an island and a tree cannot make a forest.

"I am committed to building and developing Kaduna State" the lawmaker said.

Hunkuyi further expressed concern over the crisis in the party in general, saying the formation of the Reformed APC was a serious blow to the party.

"We discussed a lot of things and it is not an understatement to say that we are all unhappy with the situation in the state.

"We discussed on how to seek solution to the challenges in the state.

"We will stand firm and strong in finding solutions to the challenges," he said.

A member of the House of Representatives, Rep. Musa Soba who also played host to the PDP members said they would inform Nigerians of their intention in no distant time.

He said, "they are our bothers and sisters from the Northern Senatorial District of Kaduna State

"They are  PDP party executive members from Kaduna State that came to seek our support  to salvage our state.

"They want us to join hands with them to do what is right for our people regardless of party affiliation.

" You know we are politicians, it is either you woo me or I woo you.

Soba said the crisis in the APC was  unfortunate, adding that the PDP was already taking advantage of it to woo politicians.

He said, "they have seen the division in APC in the state and they want to exploit that avenue  because they know our antecedent and  where we started from and they know what we want to realise as a people.

"They have extended the olive branch and we have welcomed them and we will look critically into their request with the aim of salvaging our people.

"We have not defected but we all know we have problems with the APC and I can tell you that I belong to the Reform APC.

"We are considering avenues that will enable is create political understanding with people of various political parties.

"Very soon we will make our position known if we are defecting.

The Legal Adviser to the Kaduna PDP, Mr Musa Kabir expressed optimism that their meeting with Hunkuyi and the other lawmakers would yield positive result.

He said, "we came to see the lawmaker because of his hard work. He was with us and now we want him to come back so that we can work together to salvage Kaduna State.

"We came to plead with him to team up with us to revive the PDP and from our discussion we are hopeful that he will give us a positive response.