‘This is Nigeria’: Another Muslim Group Tackles MURIC, Says Even Christians Are Not Provoked 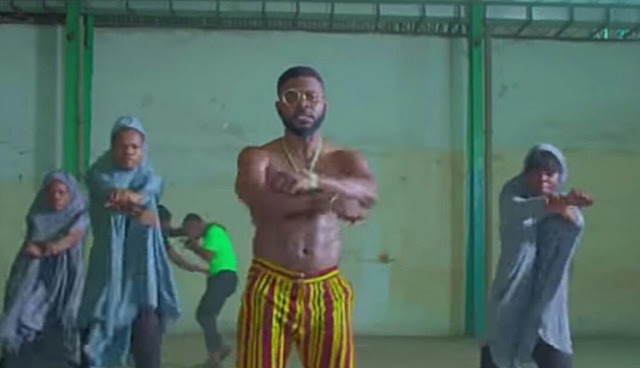 Shortly after the Muslim Rights Concern (MURIC) asked Folarin ‘Falz’ Falana to
withdraw his ‘This is Nigeria’ video, a group known as Muslim Against Terror has defended the artiste.
The group says MURIC does not have an understanding of veil usage.
In the video, girls wearing hijab are seen dancing ‘shaku shaku’, hence the controversy.
While addressing the reactions that trailed the video, Falz had explained that the girls were a representation of the abducted Chibok girls still in Boko Haram captivity.
In a statement countering that of MURIC, Muslim Against Terror asked if Ishaq Akintola, director of MURIC, would “prefer watching the ladies in the video dressed in body-hugging mini skirts and shaking their bountiful parts??
It read: “In clear contradiction to what MURIC’s Professor Ishaq Akintola claimed, Islam or Muslim was NEVER mentioned in the video and the veil is not owned by Islam but worn by anyone who so feels, hopefully to the pleasure of Muslims and worn by nuns and sometimes forcibly doused by terrorists on their captors as happened in the Chibok case.
“Where did Ishaq see Islam or Muslim in this video?
“Was this subvert threat of a possible repeat of radical and meaningless, unjustified violence by misguided Islamists in the past, a means of merely defending the Buhari administration possibly negatively affected by the viral video and defending Fulani herder-related terrorism by attempting to present the video as religiously provocative? The video was not.
“If at all the video provoked any religion it was the Christian faith, by ridiculing pastors casting out demons via grabbing female breasts, and also laying direct attacks at pastors involved in the establishment of universities which their congregations cannot attend.”
Instead of threatening Falz with legal action, the group urged MURIC to focus on the issues raised in the video.
“As regards truths of value in the video, there were very many that seemed not to be digested by Professor Ishaq, including: that the people are extremely poor, medical facilities are poor, that we operate a predatory neocolonial-capitalist system fueled on fraud and exploitation, bedeviled with institutionalized corruption, that criminal cases are settled in police stations and not courts, police station closing by six, no electricity, youth work multiple jobs and yet are called lazy by the president.”
The group urged that MURIC be careful of the propagation of sensitive messages.