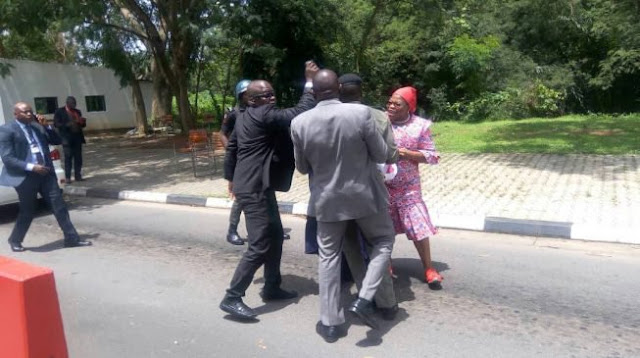 A detachment of armed security operatives attached to the presidential villa in Abuja assaulted Oby Ezekwezili, former minister of education, who embarked on a solo march to the state house, on Tuesday.
The protest which kicked off at the federal secretariat was disrupted at the villa gate.
The security operatives stationed at the gate manhandled her while struggling to collect her placard.
The ex-minister put up a resistance, forcing the plain cloth operatives to shove her.
Journalists covering the protest were not spared as their phones and cameras were seized.
Earlier, Ezekwesili told reporters that the “lukewarm attitude” of President Muhammadu Buhari to the carnage in some parts of the country influenced her action.
She accused the president of “watching with consternation, the criminal massacre of Nigerians especially in the first half of this year without any evidence of fierce sense of urgency on the part of his government to end the abnormality”.
Among the demands she highlighted in her message to the president were:

An end to the endless killings by herdsmen going on in the country.
Reveal the identity of the perpetrators of these wanton killings in Benue, Taraba, Kaduna, Zamfara, Plateau, Nasarawa and Kogi states etc.
Give justice for the victims of violent killings across the country and secure the living in all part of the country.
End the ineffectiveness of the security establishment.
End your loyalty to the Service Chiefs
Stop the blame game and confusing statement on the killings of the citizens.