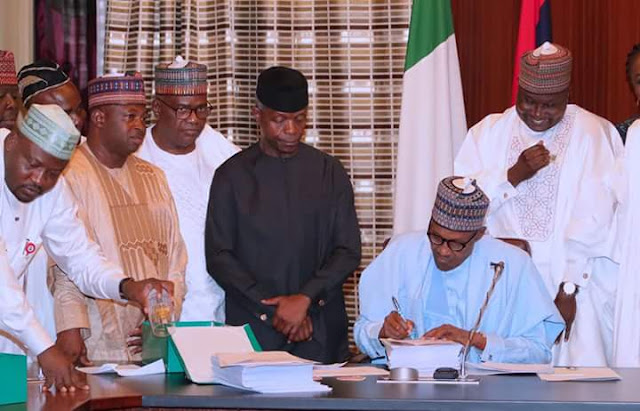 President Muhammadu Buhari has signed the 2018 N9.12 trillion Appropriation Bill into law in the absence of the Senate President Bukola Saraki and the Speaker of the House of Representatives, Yakubu Dogara.

The budget was assented to by the President at exactly 12;05 noon at the mini conference room of the Presidential villa, Abuja.
Buhari while signing the budget said he was compelled to sign the budget not to keep the economy continuously on standstill.
He berated the National Assembly for cutting the budget estimates, especially in key sectors which he said would have impacted more on the economy.
He also indicated the interest to forward supplementary budget to the National Assembly to make up the figures that were cut by the lawkers.

The following is the complete text of the President's statement at the budget signing.

SPEECH BY HIS EXCELLENCY, MUHAMMADU BUHARI, PRESIDENT OF THE FEDERAL REPUBLIC OF NIGERIA, AT THE SIGNING INTO LAW, THE 2018 APPROPRIATION BILL, PRESIDENTIAL VILLA, ABUJA,
WEDNESDAY, JUNE 20TH, 2018