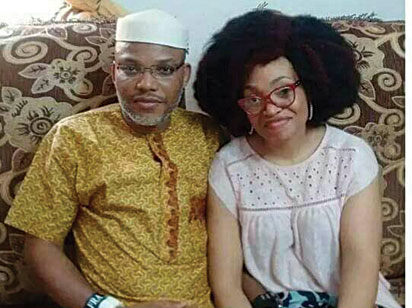 Nnamdi Kanu, leader of the Indigenous People of Biafra, IPOB, has been spotted by security agents in Ghana, according to TheCable.
There has been controversy over the whereabouts of the IPOB leader who was last seen in public in September 2017 before the military launched Operation Python Dance ll apparently to quell the agitation for the breakaway of south-eastern Nigeria.
Since the military raided his home in Umuahia, Abia state, there has been speculation that he was arrested and might have been killed.
At some point, Orji Uzor Kalu, former governor of Abia state, said Kanu was in London.
His court trial for treason has stalled and Enyinnaya Abaribe, the senator who served as Kanu’s surety when he was granted bail after spending 18 months in detention, has sought to be discharged from the obligation after his disappearance.
However, security sources have informed TheCable that Kanu was ferried to the Niger Delta creeks by militants at the height of Python Dance II, from where he found his way to Ghana by sea.
The report said Kanu is regularly seen at Kenzo Bar and IBG saloon in Accra, disguised in fez cap and usually in company of his wife, Uchechi.
Kanu is said to live at an area called Cantonment, also in Accra, at an estate called “Arabella”.
He regularly patronises suya joints in remote parts of the city, according to the sources.
If confirmed, this will lay to rest speculations on the fate of the IPOB leader.
His brother once asked the military to release his dead body if he had been killed.